Warning message of God: Verily, don’t allow yourself to be taken over. Yet a little while, and your soul is 100% in hell! Read or listen to the complete message. 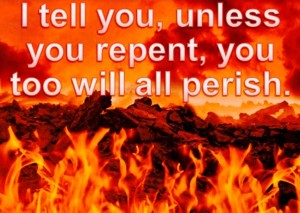 Hello, very welcome! On March 13th, 2016, the messenger angel of God brought on the following message, commissioned by the almighty God, YHWH, the God of Abraham, Isaac and Jacob, to Benjamin Cousijnsen, end-time Prophet of the last days.

Verily, child of the Most High, everything shakes and shudders!
The Lord your Rabbouni, El Elohím, Adonai, is kadosh, holy and loving, but is also righteous. Ask remorse, because more and more transgressions of your sins are appearing. And your yoke keeps getting heavier, and the sins make your head bend. You allow yourself to go down! Verily, my name is Lovesadai and I am a messenger angel of God.

Wisdom 17, verse 1 to 19  O Lord, your acts of judgment are marvelous and hard to explain; that is why people who had not been taught about them went astray. When lawless people imagined that they had your holy nation in their power, they were themselves imprisoned in a long night of darkness. They lay in their own houses, shut off from your eternal care. They thought that their sins had been secret and unnoticed, shielded from view by a dark curtain of forgetfulness, but now they were horribly afraid, confused, and terrified by ghostly forms. Not even the dark corners where they lay could protect them from fear. They were surrounded by horrible noises; grim ghosts with gloomy faces appeared before their eyes. No fire had power to give them light, and the brilliant stars could do nothing to relieve that deathly darkness. There was only a dreadful fire, lit by no human hand, that shone on them, and in their terror they believed that the real world was even worse than the things they imagined. The illusions produced by their magic tricks were put to shame, and all the wisdom they had boasted of came to nothing. They had claimed they could drive away all the fears and illnesses of sick minds, but now they themselves were sick with silly, groundless fears. Even though nothing dangerous had actually happened, they were terrified by hissing snakes and animals advancing on them. And so they died, shaking with fear, afraid even to open their eyes, yet unable to keep them shut. Wickedness is cowardly in itself and stands self-condemned. Someone with a guilty conscience will always imagine things to be worse than they really are. Fear is nothing but the failure to use the help that reason gives. When you lack the confidence to rely on reason, you give in to the fears caused by ignorance. All night long those people slept the same restless sleep, even though the night held no power over them, since it came from the powerless depths of the world of the dead. They were chased by hideous forms and lay paralyzed as they surrendered themselves to the sudden, unexpected fear that came over them. People would suddenly collapse and lie locked in the chains of their own fear. Farmers, shepherds, and laborers out in the countryside were captured by the same inevitable fate and bound in the darkness by the same invisible chain. They were panic-stricken by the sighing of the wind or by the singing of birds in the trees or by the roar of rushing water or by the rumble of falling rock or by the sound of unseen creatures running about or by the savage roaring of wild animals or by the echoes from the mountains.

Verily, don’t you see that the light goes down?
And that you are hissing in a sick way like a wild animal, under the influence of threatening evil spirits? Verily, don’t allow yourself to be taken over. Yet a little while, and your soul is 100% in hell!

Verily, in Amsterdam they found a head on the ground, without a body.
And a Russian mother had her 8 month old little daughter burned alive in a baking oven, and a Chinese mother had her baby torn up badly, because the child put his teeth in her breast. She took a pair of scissors, and lashed out up to 90 times with the scissors.

Verily, there is only salvation and protection with Yeshua HaMashiach, Jesus Christ!
But he who does not want to hear, is going to perish. Repent! And say one of the prayers of repentance from the EvangelicalEndtimemachine.com. Click on Salvation Prayer.

Daniël 10, verse 19  and he said, “Don’t be frightened! God thinks highly of you, and he intends this for your good, so be brave and strong.” At this, I regained my strength and replied, “Please speak! You have already made me feel much better”.

And John 3, verse 16 to 21  For God so loved the world, that he gave his one and only Son, that whoever believes in him should not perish, but have eternal life. For God didn’t send his Son into the world to judge the world, but that the world should be saved through him. He who believes in him is not judged. He who doesn’t believe has been judged already, because he has not believed in the name of the one and only Son of God. This is the judgment, that the light has come into the world, and men loved the darkness rather than the light; for their works were evil. For everyone who does evil hates the light, and doesn’t come to the light, lest his works would be exposed. But he who does the truth comes to the light, that his works may be revealed, that they have been done in God.
And verse 36  One who believes in the Son has eternal life, but one who disobeys the Son won’t see life, but the wrath of God remains on him.