For all men who were ignorant of God were foolish by nature; and they were unable from the good things that are seen to know him who exists. Yet again, not even they are to be excused! (After clicking the video, wait for a moment until it plays.) 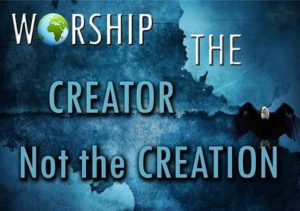 Hello, very welcome! This is a message from God, delivered, word for word, on March 9th, 2018, to end-time Prophet Benjamin Cousijnsen.

Verily, Kadosh, Holy is the Lord!

Baruch 6, verse 57  Gods made of wood and overlaid with silver and gold are not able to save themselves from thieves and robbers.

Verily, prick up your ears, for this is what you must hear!

Wisdom 13, verses 1 to 19  For all men who were ignorant of God were foolish by nature; and they were unable from the good things that are seen to know him who exists, nor did they recognize the craftsman while paying heed to his works; but they supposed that either fire or wind or swift air, or the circle of the stars, or turbulent water, or the luminaries of heaven were the gods that rule the world. If through delight in the beauty of these things they assumed them to be gods, let them know how much better than these is their Lord, for the author of beauty created them. And if they were amazed at their power and working, let them perceive from them how much more powerful is he who formed them. For from the greatness and beauty of created things comes a corresponding perception of their Creator. Yet these men are little to be blamed, for perhaps they go astray while seeking God and desiring to find him. For as they live among his works they keep searching, and they trust in what they see, because the things that are seen are beautiful. Yet again, not even they are to be excused; for if they had the power to know so much that they could investigate the world, how did they fail to find sooner the Lord of these things? But miserable, with their hopes set on dead things, are the men who give the name “gods” to the works of men’s hands, gold and silver fashioned with skill, and likenesses of animals, or a useless stone, the work of an ancient hand. A skilled woodcutter may saw down a tree easy to handle and skillfully strip off all its bark, and then with pleasing workmanship make a useful vessel that serves life’s needs, and burn the castoff pieces of his work to prepare his food, and eat his fill. But a castoff piece from among them, useful for nothing, a stick crooked and full of knots, he takes and carves with care in his leisure, and shapes it with intelligent skill; he forms it like the image of a man, or makes it like some worthless animal, giving it a coat of red paint and coloring its surface red and covering every blemish in it with paint; then he makes for it a niche that befits it, and sets it in the wall, and fastens it there with iron. So he takes thought for it, that it may not fall, because he knows that it cannot help itself, for it is only an image and has need of help. When he prays about possessions and his marriage and children, he is not ashamed to address a lifeless thing. For health he appeals to a thing that is weak; for life he prays to a thing that is dead; for aid he entreats a thing that is utterly inexperienced; for a prosperous journey, a thing that cannot take a step; for money-making and work and success with his hands he asks strength of a thing whose hands have no strength.

Verily, my name is Schaldish, and I am a messenger angel of God.

Baruch 6, verses 16 and 17  Therefore they evidently are not gods; so do not fear them. For just as one’s dish is useless when it is broken, so are the gods of them, when they have been set up in the temples. Their eyes are full of the dust raised by the feet of those who enter.

Verily, whoever sets God’s admonition at naught is dumber than a dead piece of wood!
Verily, you are only safe in Yeshua HaMashiach, YHWH, Jesus Christ! He alone gives you rest, and takes care of you, and delivers you. He has taken upon himself the sin ties. He alone gives you strength and salvation, and is faithful, the Rock of the ages in whom one can trust!