April 5, 2012  Again Prophet Benjamin Cousijnsen describes in detail everything, what the angel of the Lord shows him. From the time machine he looks at future events here on earth, during and after the Rapture. 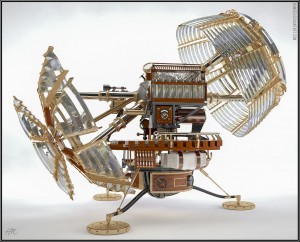 Welcome! The following vision was given to Prophet Benjamin Cousijnsen on April 5th, 2012. Benjamin writes,

In my sleep I heard these words…
Benjamin, once there has been spoken a prophetic message over your life: ‘You will be a hero’. Wake up now.
Immediately I reacted and I got up… “Can my wife come along too?” I asked. “The previous day my wife had indicated, she wanted once to come along. She also would like this very much”, I said.
The angel said: Hero of God, she cannot bear this. But it won’t be for long anymore, and then she will see God, with you and many others. You may see God’s abomination, hero of God.
“No, for me no scary things”, I said in the street…

I was still speaking, when I was suddenly in beautiful surroundings, it did seem like paradise!
I thought, ‘Is this scary?’ Because I heard beautiful bird sounds, I could even hear the splashing of flowing water.
Benjamin, it is beautiful here, isn’t it?
“Yes, really beautiful! This, I find relaxing”, I said.
I have a gift for you, said the angel, this really belongs to you!
I thought of everything, even of money.
Look once behind this bush! I went over, pulled the bush aside, and what I saw then… I was very surprised!

‘That looks like a time machine’, I thought, and immediately the angel said: This is a time machine!
Step inside. I thought, ‘I wished my wife was with me’. Then I saw a smile appearing on the face of the messenger angel.
“How does this work?” I asked.
The angel of the Lord pushed down a kind of lever. I heard the angel yet calling the final words: Benjamin, travel well!

I saw consecutive events around me, which alternated with each other…
It was enormous and in 3D! This, while the time machine vibrated – compare it to the movie ‘The Time Machine’ – only this was much more impressive!

The Lord showed me future images…
I saw the dead, who were removed from the freezer, in order to move body parts into another man, or was it a robot? Because I saw an open chest with a red, yellow and blue wiring, lying inside the operating room.

A moment later I saw a dark room, where satan and his demons were sitting at the table.
They talked and they gossiped about someone; it appeared to be Jesus Christ. It was a meeting.

I saw a plane disaster, from which the pilot had suddenly disappeared, along with some travelers.
This aircraft crashed… an explosion followed.

Elsewhere everything was falling from the sky… I saw a helicopter, crashing into a skyscraper. I became very afraid of what all I had seen. But I hardly felt fear when the angel sat suddenly beside me, and said: Fear not! I have come in God’s joy, in order to refresh you. The angel said: Romans 15, verse 32 I asked, “What is written there?”
The same, what I already said and more, said the angel.

I saw people screaming in panic, crying and walking around infatuated in the church, because people had just suddenly disappeared.
I saw a father, left behind, whose wife, daughter and baby had disappeared; at one time they were gone! I heard a voice saying: All things shall perish, Benjamin, God speaks:

I saw images of burning cars…
I saw a mother with a photo frame in her hand, and she held it against her; she was confused while walking through the streets. There was a great confusion among the people!
I saw a priest, who was trampling his own pack of cigarettes, and he said: “He who commits sin, is of the devil! I was wrong!” he said regretfully. “I should have pondered 1 John 3, verse 6 to 10 better!”

“What kind of disaster was this?” I asked the angel of God.
These are the signs of God, the angel answered, that shall be done. Not in order to scare the people, but to shake them awake. Repent, get yourself ready! said the angel. Come to Jesus Christ, He has been calling you for so long already! the angel cried. Take this message seriously. Make your choice now, while you still can, or perish: for or against Jesus Christ… eternal pain, hell, that you do not need to experience today yet, or do you choose heaven, where Jesus Christ awaits you with His love and peace? Where there is never pain!

Make your choice now, before it is too late, or you will be left behind in the end times, in which you certainly don’t want to be, because it will be unbearable!

Suddenly the time machine, in which I sat, stood still… it stopped in front of our home.
Benjamin, hero of God, how did you like it?
“Leave that ‘hero’ out,” I smiled, “what I saw, was very shocking!”
Arriving at my bed room, the angel said: Benjamin, had your wife still wanted to come along?
“Yes,” I said, “but not with anything like that, because everything I’ve seen today, like this, is too serious.”
Just tell her, that there will come a big feast… the King is coming!
“I hear this very often,” I said.
The angel said: Look, what I showed you. Look at this world today. Soon the clock will be ticking no longer, because those who have accepted Christ, will hear no time and no ticking anymore. They will rejoice in Him, who is coming very soon!

While I was in bed again, the angel said, Jesus Christ is with you, He protects and blesses you.
And he who does not want to listen to you with God’s message, and does not take this seriously, will perceive it, when Jesus, the King, is coming!
Sleep well, and make no noise, otherwise your wife will awake. Suddenly the angel of God was gone, and I had to recover from all that I had seen and heard. I went downstairs momentarily, in order to write down everything again, what I had heard and seen literally.