JANUARY 19, 2013  PROPHETIC MESSAGE: BENJAMIN COUSIJNSEN WROTE DOWN THIS REPORT, AFTER HE HAD GONE A LITTLE BIT FORWARD WITH GOD’S TIME MACHINE. AGAIN THE LORD SHOWS, WHAT WILL HAPPEN AFTER THE RAPTURE! 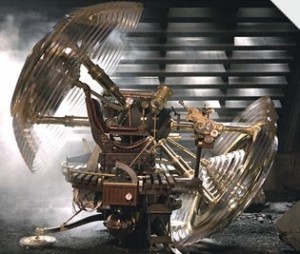 Benjamin Cousijnsen wrote down this report afterwards…
Shalom, Prophet Benjamin Cousijnsen! It’s me, Michaël, the messenger angel of God.
I heard the voice of the messenger angel of God in the distance… Benjamin, wake up! It was loud and penetrating now.
“Good morning!” I said.
Benjamin, I’m standing beside your bed.
I smiled and said, “I didn’t expect I would see you against the ceiling.”
Benjamin, I greet you in the almighty name of the God of Isaac, Jacob and Abraham, and the Son, Yeshua HaMashiach, Jesus Christ, who is alive. Follow me, Benjamin.
I followed the angel of the Lord down the stairs, and he said, Benjamin, how those stairs are creaking, it seems like a whole army is following me!
At the front door I said, “Shall I neatly open the front door for us?”
The angel of God spoke, Why, Benjamin? Do you fear running into the door? The hidden things and thoughts have been revealed for the almighty Lord, your God, and the angels of God to all eternity, like God wants.
I stepped through it effortlessly, while the door was closed.
Don’t you see how easy this was? spoke the angel of the Lord.
Faith is doing, action, in the almighty name of Yeshua HaMashiach, Jesus Christ!

Benjamin, there’s your Eindtijdspace time machine, spoke the angel of the Lord.
In the parking lot was a shiny gold colored time machine, like in the movie ‘The Time Machine’. I sat down in it and felt that this machine was just as real as the cars of the neighbors, which were beside us.
“But if I tell this later, who will believe me?” Benjamin said.

Benjamin, it is written: Jeremiah 32, verse 27  Behold, I am the LORD, the God of all flesh: is there anything too wonderful for me?

The angel of the Lord, Michaël, spoke, Benjamin, God’s beloved Prophet, you’re going to travel with this time machine on your own!
“On my own? Oh my!” I said, “then I’ll certainly end up in the time of the dinosaurs, or in hell?”
The angel of the Lord said, smiling, Benjamin, you must remember, that you can travel between the numbers 13 and 16. And when this light is red, you go right back to 13.
“Okay,” Benjamin said, “so with 13 I am back here in this time, am I?”
Yes Benjamin, that’s right.
“Will you not come with me, Michaël?” I asked.
No, said the angel of God, smiling, I’ve got better things to do! Michaël said and repeated yet: If the red light is lit, then come back immediately. And put the lever exactly on 13, and don’t move it further downwards, or else you’ll see things, that you certainly fear. I wish you a good journey!

I have very carefully moved the lever slightly forward… and I went away.
Around me I saw fast images of houses and trees, flying by very rapidly. Then the fast images around me stopped, and I saw that I was in a totally different environment. I looked around me, and this is what I saw…

When I arrived, here and there I saw coming down a black smoke beam, with something flammable within, but also fire beams in the sky, and impacts and I heard explosions and also saw devastations in the distance.
I stepped out, and I read a sign with the street name ‘Walnut Street’. I saw a busy highway, going across the water. I had stopped near an almost square building, with a lot of visitors. Above, I read the name ‘Starbucks’, and even saw a McDonald’s.

I walked to a man and a woman with children, and asked them where I was, because I didn’t know exactly where I had ended up.
The man told me that I was in America, near Newport, and began to talk busily. While he was talking, I suddenly heard the voice of the Lord, who spoke to me. I heard,

Luke 21, verse 13 to 15  It will turn out as a testimony for you. Settle it therefore in your hearts not to meditate beforehand how to answer, for I will give you a mouth and wisdom which all your adversaries will not be able to withstand or to contradict.

Finally I could come between them, and I could give my testimony to this family.
And I told these people, that I believe in Jesus Christ, and that He is risen from the dead, and that I am a born again Christian and am called God’s beloved Prophet, Benjamin Cousijnsen, by the Lord.
These people seemed to be friendly, and so I told about Jesus Christ. One of the children suddenly said, “Mama, he belongs to the haters, doesn’t he?”
“Haters?” I said, “I hate nobody, only satan”.
These people kindly invited me, to drink together a cup of coffee at Starbucks. We had coffee together, and this couple seemed to be impressed by what I told them, and they asked me: “Would you like to pray with us? We want to know Jesus Christ better also”. The woman indicated for a moment, she wanted to go to the toilet.

Moments later she came back, with two army soldiers, and pointed at me!
For a moment I smiled yet, but that changed quickly, because a gun was being pointed at me.
“What’s going on?” I said.
The soldier shouted, “You’re one of the ‘haters’, you are a Christian, and all Christians are being put in our FEMA camps, commissioned by the U.S. government, look!” He showed me a document, with a company name on it, ‘Halliburton’. This company was instructed, in order to activate the FEMA camps, signed by Obama.
“Is it clear now?” the soldier yelled, “come quickly!”
I saw yet that the man of the family, who had bought me coffee, scanned his hand in order to pay for the coffee.

I was taken to a room in the same building; a soldier kept standing at the door.
The other came and stood before me, and said: “We belong to Islam and Obama. Accept the chip, and you are free to go!”
I said, “And thus it is written: Revelation 13, verse 16 to 18”.
“WHAT, it is written!” yelled the soldier, “shut up! We have taken over America!”

Then the door opened, and Obama entered, and immediately said…
“I AM, Bless America and the whole world! You are a Prophet of God and I hate you and all the Christians. Your God is not a God, I am the god!” Suddenly Obama wanted to grab me, but failed, because his hand went right through me. Then I stood up and walked away. They shot at me; the bullets went right through me, and I knew now that they were not able to hit me, and that I could walk through the wall. And I did do so. So I went outside.

Again I was shocked, because I saw a tramp-like person with a bloody face.
He was munching on someone. This vampire-like person saw me and came after me, but I was much faster, and I walked towards the time machine. Luckily I looked, because I saw that the red button was on. I sat down, and put the lever quickly back at 13.

Again the environment changed quickly around me, fortunately, and the time machine stopped.
Fortunately I saw our home and Michaël standing before me again. The angel of the Lord said, Benjamin, you are back!
“How long have I been gone?” I asked.
Three minutes! the angel of God said, smiling.
“Will I experience this in the future then?” I asked.
No, Benjamin, said the angel of God, you were this person, but you shall have been raptured and be with the Lord.
I said, “I don’t understand any of this.”
The angel of God spoke, The Almighty does, Benjamin.

Verily, there will be rain and fire and sulfur and violence  of war and persecution of Christians!

I asked, “When will all this happen?”
Very soon, replied Michaël, the angel of the Lord.
The beloveds must prepare themselves and sanctify themselves, before Yeshua HaMashiach, Jesus Christ, is coming.
I’m going now, Prophet Benjamin Cousijnsen, and he who does not want to hear, will perish. The time is very near!
Ruacha, Yeshu, Shalom! spoke the messenger angel of God.