This message of God is spoken in imagery in the ‘present time’. This has been revealed to you, in order to encourage you to be taken away by Yeshua HaMashiach, Jesus Christ, when He comes! 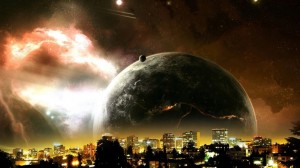 Hello, very welcome! On November 18th, 2014, an angel of the Lord brought on, word for word, the following message to end-time Prophet Benjamin Cousijnsen, who also writes down everything immediately, in the presence of the messenger angels of God.

Verily, I speak in metaphors…
Roberto was a born again Christian. And what a shock… the visitors from space have landed! Many spaceships have landed on Earth. They bring even more technology with them. This is in order to restore the damage!

Roberto heard phrases from their spaceship, such as:
“We have taken away the haters from you! We respect you. We are also against the natural and are on your side. Choose your own relationship with any gender whatsoever, with which you want intercourse!” Verily, the visitors are going in against God’s word and approve everything, which goes in against the truth.

Verily, many churches and believers now already close their mouths, and even consecrate the against-natural couples.
Many have become disqualified by their takeover, because they have abandoned the Holy Scriptures, God’s words.

Romans 1, verses 24 to 28  Therefore God also gave them up in the lusts of their hearts to uncleanness, that their bodies should be dishonored among themselves, who exchanged the truth of God for a lie, and worshiped and served the creature rather than the Creator, who is blessed forever. Amen. For this reason, God gave them up to vile passions. For their women changed the natural function into that which is against nature. Likewise also the men, leaving the natural function of the woman, burned in their lust toward one another, men doing what is inappropriate with men, and receiving in themselves the due penalty of their error. Even as they refused to have God in their knowledge, God gave them up to a reprobate mind, to do those things which are not fitting.

Verily, the remaining Christians, if they repent as yet, are beheaded and hanged.
And they organize a game full of sadistic tortures! Roberto could not understand why he had stayed behind.
Verily, it is better that you will be raptured. The fallen angels have different techniques of hypnosis, and are able, just like the antichrist, to bring many into a state of rhythm through talking, and force them in that way to make them do their will – needs. Verily, this has been revealed to you, in order to encourage you to be taken away by Yeshua HaMashiach, Jesus Christ, when He comes. Be pure and maintain your relationship with the Truth, Yeshua HaMashiach, Jesus Christ, and don’t be conformed to the world! Ask each day for forgiveness of your failure, and ask Yeshua HaMashiach, Jesus Christ, to cover you under His protecting and precious Blood.

John 3, verses 16 to 21  For God so loved the world, that he gave his one and only Son, that whoever believes in him should not perish, but have eternal life. For God didn’t send his Son into the world to judge the world, but that the world should be saved through him. He who believes in him is not judged. He who doesn’t believe has been judged already, because he has not believed in the name of the one and only Son of God. This is the judgment, that the light has come into the world, and men loved the darkness rather than the light; for their works were evil. For everyone who does evil hates the light, and doesn’t come to the light, lest his works would be exposed. But he who does the truth comes to the light, that his works may be revealed, that they have been done in God.
John is 14, verse 17  Here it is written: The Spirit of truth, whom the world can’t receive; for it doesn’t see him, neither knows him. You know him, for he lives with you, and will be in you.