A MESSAGE FROM THE LORD GOD, THE GOD OF ABRAHAM, ISAAC, AND JACOB, BROUGHT ON BY A MESSENGER ANGEL OF GOD TO PROPHET BENJAMIN COUSIJNSEN, AND IN HIS PRESENCE WRITTEN DOWN, WORD FOR WORD, IMMEDIATELY!

Hello, very welcome! On March 11th, 2014, the following message was brought on by a messenger angel of God to Prophet Benjamin Cousijnsen.

Shalom! I greet you, beloveds of God, in the almighty Name of your Rabbouni and your only Lord, the King of kings, Yeshua HaMashiach, Isa, Jesus Christ.

John 19, verses 2 to 5  The soldiers twisted thorns into a crown, and put it on his head, and dressed him in a purple garment. They kept saying, “Hail, King of the Jews!” and they kept slapping him. Then Pilate went out again, and said to them, “Behold, I bring him out to you, that you may know that I find no basis for a charge against him.” Jesus therefore came out, wearing the crown of thorns and the purple garment. Pilate said to them, “Behold, the man!”

Listen once carefully, my name is Saffirah, and I am a messenger angel of God.
Verily, the Jujube, Ziziphus spina-christi, was really the crown that Yeshua HaMashiach, Isa, Jesus Christ, wore. You call it also the ‘Christ’s thorn’. This wild bush can grow up to 36 feet tall.

Luke 22, verses 63 and 64  And the men who held Jesus mocked him and beat him. Having blindfolded him, they struck him on the face and asked him, “Prophesy! Who is the one who struck you?”

Verily, this ‘Christ’s thorn’, so named by you, had very long sharp thorns that were up to 2.5 cm long! 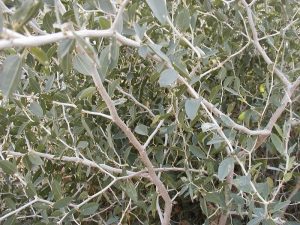 Luke 22, verses 33 and 34  He said to him, “Lord, I am ready to go with you both to prison and to death!” He said, “I tell you, Peter, the rooster will by no means crow today until you deny that you know me three times”.

Verily, what beautiful words did all His followers not speak to the King of kings?
But He perceived their hearts! Verily, and how is your relationship with Him? What do you think you have to work on yet, in order to be able to receive more blessings?

Luke 22, verses 55 to 62  When they had kindled a fire in the middle of the courtyard, and had sat down together, Peter sat among them. A certain servant girl saw him as he sat in the light, and looking intently at him, said, “This man also was with him.” He denied Jesus, saying, “Woman, I don’t know him.” After a little while someone else saw him, and said, “You also are one of them!” But Peter answered, “Man, I am not!” After about one hour passed, another confidently affirmed, saying, “Truly this man also was with him, for he is a Galilean!” But Peter said, “Man, I don’t know what you are talking about!” Immediately, while he was still speaking, a rooster crowed. The Lord turned, and looked at Peter. Then Peter remembered the Lord’s word, how he said to him, “Before the rooster crows you will deny me three times.” He went out, and wept bitterly.

Verily, thus the Lord still speaks to many people and to you!

Luke 9, verses 23 to 26  He said to all, “If anyone desires to come after me, let him deny himself, take up his cross, and follow me. For whoever desires to save his life will lose it, but whoever will lose his life for my sake, the same will save it. For what does it profit a man if he gains the whole world, and loses or forfeits his own self? For whoever will be ashamed of me and of my words, of him will the Son of Man be ashamed, when he comes in his glory, and the glory of the Father, and of the holy angels”.

Verily, your King suffered for you on the cross and bore the sins on himself, your punishment, that man deserved!
He opened the way, your relationship to Him and His Father, and conquered death. Never let it get as far as this:

Mark 8, verse 33  But he, turning around, and seeing his disciples, rebuked Peter, and said, “Get behind me, satan! For you have in mind not the things of God, but the things of men”.

John 3, verses 16 and 17  For God so loved the world, that he gave his only begotten Son, that whosoever believes in him should not perish, but have everlasting life. For God didn’t send his Son into the world to judge the world, but that the world should be saved through him.