A message of God: Terror movement Boko Haram has been defeated. Yet they are massively among the refugees! Hear or read the entire message. 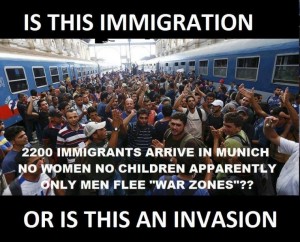 Hello, welcome! On February 15th, 2016, the messenger angel of God brought on, word for word, the following revealing message of God to end-time Prophet Benjamin Cousijnsen.

Shalom! I greet you in the wonderful name of Yeshua HaMashiach, Jesus Christ. Verily, my name is Seprea and I am a messenger angel of God.

Verily!
On January 19, 2015, it was already foretold by God’s true end-time Prophet Benjamin Cousijnsen, that Boko Haram would soon be inflicted with a severe blow by God’s hand. Verily, despite the fact that the death and destruction terror movement Boko Haram has been inflicted with a blow, they continue. Even though they are defeated, they are massively among the refugees, and have contact with their attack organizations!

Verily, it is also true that many refugee camps are threatened with death, and don’t dare to report this.
Also outside the camps, many are threatened and forced into rape! Many are now silent already about what has been done to them, by both ISIS fighter extremists and other Muslim refugees! One also conceals the fact that the police often have to advance, because of fights, expressions of faith, and rapes, among others! This is often not reported. They fear the media and getting a bad name within the refugee camps.

If there are too many refugees and no room…
refugees are sometimes not transferred to another camp, but eliminated elsewhere, commissioned by the antichrist Obama! Many refugees are also asked to donate a kidney, or other body part, in order to help others. One will then get the promise: a better life in return, they say, and money, as a reward. Obama will pay!

Verily, the antichrist says the following:

Psalm 109, verse 25  I have also become a reproach to them. When they see me, they shake their head.
And Psalm 119, verse 145  I have called with my whole heart. Answer me, O LORD! I will keep your statutes.

Verily, the antichrist often speaks spiritual words and even uses the Bible in his favor!