A message of God: You receive a response in this message to the question in the title, and to the question: does God use both the sun and the moon as a sign? 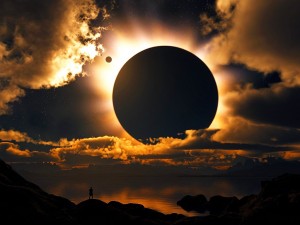 Hello, welcome! On March 20th, 2015, a messenger angel of God brought on word for word the following message to prophet Benjamin Cousijnsen.

Shalom! I greet you in the wonderful name of Yeshua HaMashiach, Jesus Christ. Verily, my name is Badillag and I am a messenger angel of God.

Amos 8, verse 9  It will happen in that day, says the Lord GOD, that I will cause the sun to go down at noon, and I will darken the earth in the clear day.

Joel 2, verse 30 to 32  I will show wonders in the heavens and in the earth: blood, fire, and pillars of smoke. The sun will be turned into darkness, and the moon into blood, before the great and terrible day of the LORD comes. It will happen that whoever will call on the name of the LORD shall be saved; for in Mount Zion and in Jerusalem there will be those who escape, as the LORD has said, and among the remnant, those whom the LORD calls.

Mark 13, verse 24 to 26  But in those days, after that oppression, the sun will be darkened, the moon will not give its light, the stars will be falling from the sky, and the powers that are in the heavens will be shaken. Then they will see the Son of Man coming in the clouds with great power and glory.
And verse 33  Watch, keep alert, and pray; for you don’t know when the time is.

Verily, and does God use both the sun and moon as a sign?
Yes!

Genesis 1, verse 14  God said, Let there be lights in the expanse of sky to divide the day from the night; and let them be for signs, and for seasons, and for days and years.

Luke 21, verse 25  There will be signs in the sun, moon, and stars; and on the earth anxiety of nations, in perplexity for the roaring of the sea and the waves.

Joel 2, verse 10  The earth quakes before them. The heavens tremble. The sun and the moon are darkened, and the stars withdraw their shining.

Revelation 6, verse 12 and 13  I saw when he opened the sixth seal, and there was a great earthquake. The sun became black as sackcloth made of hair, and the whole moon became as blood. The stars of the sky fell to the earth, like a fig tree dropping its unripe figs when it is shaken by a great wind.

Luke 21, verse 36  Therefore be watchful all the time, praying that you may be counted worthy to escape all these things that will happen, and to stand before the Son of Man.

Verily, was this eclipse a sign?
No. But when the darkness comes and the moon turns to blood, and the ground begins to shake, be then vigilant to what’s coming!
I’m going now, Ruacha, Yeshu, Shalom! spoke the messenger angel of God, and disappeared.