THE ANGEL OF GOD APPEARS IN BROAD DAYLIGHT AND SHOWS BENJAMIN COUSIJNSEN THE THRONE WITH YESHUA HAMASHIACH. BENJAMIN WRITES DOWN THE MESSAGE AND DESCRIBES WHAT HE SEES! 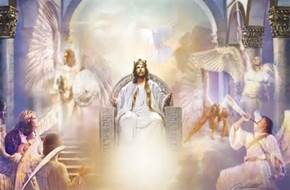 While I was in my bedroom, there was a kind of light, that became bigger… and there, in this beam of light, the angel of God appeared, who brought a revelation.
Shalom, Benjamin! My name is Michaël. I have come to you in the mightiest name of Yeshua HaMashiach, Jesus Christ. Look closely, Benjamin, and write down,

I saw a holy temple of God…
Beyond, a bit further, I saw Yeshua HaMashiach on His throne, at the top of the long staircase. On both His sides, I saw angels and bright light. Above the throne of Yeshua HaMashiach I saw a kind of arch of angel wings. His robe was dropped over the stairs.
Just next to the stairs, to both His sides, I saw water flowing down. I heard the water pattering. I saw beautiful colors around me, resembling the colors of a rainbow.
Behind the water was a big high wall, on which were countless angels, with long trumpets. There was a red carpet lying, which ran down over the stairs.
I also saw a kind of angel, six angels of this kind I saw, and heard the rustle of wings above me. They had four faces.
Michaël said: The face of these angels, Benjamin, as you can see, is of a cherub and of a human and of a lion and of an eagle. Benjamin, fear not, spoke Michaël.

The angels sang: “Holy, holy, holy is the Lord!”
I also saw that these kinds of angels had six wings. It seemed that these angels had many eyes, and they protected this holy temple of God.

Far down the stairs, I saw an angel with a donkey.
Michaël told me that it was the same donkey, as when Yeshua HaMashiach, Jesus Christ, was on Earth. What I saw gave me a wonderful feeling. I saw angels and also strange creatures, waving with branches of palm trees, next to the donkey. But the path remained clear. I saw that some angels moved in a split second, and then they were over there and then they moved to the other side again.

Suddenly the revelation image became smaller and smaller…
I just saw beautiful butterflies passing by, before the image was closed. The smell was heavenly! Due to the smell, one feels and experiences rest and relaxation and peace. That’s how I can best describe it.

For a second I thought, ‘Would the Lord then still come back on a donkey?’
But Michaël picked up my thoughts when I looked at this donkey, and said: Benjamin, of course Yeshua will come back, in the clouds!

You, who’re listening,
If you don’t have bondages and sins, and you are born again and you are free, because you brought everything to the cross, then you are truly free. And if you have crucified your flesh and surrendered to Jesus Christ, then He says, Go and sin no more! The wide road leads many to destruction, because this is the easiest way. But the way that leads to true life is narrow, and few are finding this road. But if you walk according to this road, that narrow difficult road, and give your life to Yeshua HaMashiach, Jesus Christ, and open your heart to Him, you will be one of the few who will be saved and have eternal life.

The time is near!
Even the angels are singing it, and God smiles at His Son. Everything has been prepared. Where will you be shortly? Now choose whom you want to serve! If you choose for Him, then also follow His ways, and put away all your idols and your images now. God hates it! Shalom! Get ready for Rosh Hashanah! The God of Abraham, Isaac and Jacob is the only God, and His Son is Yeshua HaMashiach, Jesus Christ. Behold, He is coming very soon.
Shalom! spoke the messenger angel of God, and disappeared.