PROPHECY: PROPHETIC, REVEALING AND WARNING MESSAGE, BROUGHT ON TO PROPHET BENJAMIN COUSIJNSEN, ABOUT ASSAD, THE USA, POPE FRANCIS AND OBAMA, AND AFRICA. AND THE LORD CALLS OUT TO THE JEWISH PEOPLE! 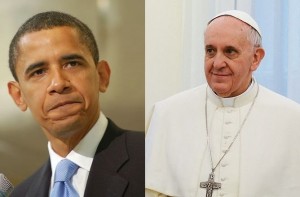 Hello, welcome! On January 22nd, 2014, an angel of the Lord brought on this prophetic, revealing and warning message of God to end-time Prophet Benjamin Cousijnsen.

Shalom! I greet you in the almighty name of Yeshua HaMashiach, Isa, Jesus Christ. Verily, my name is Rafaël and I am a messenger angel of God.

Verily, hear!
Thus speaks Yeshua HaMashiach, Isa, Jesus Christ, to you. For so long I have spoken to you through Prophet Benjamin Cousijnsen. He who hates reproof is stupid!

Verily, the United States is cursed and will disappear.
Your country is defiled and attracts only that which belongs to the antichrist!

Verily, if one follows the messages closely,
then one knows that the Pope Francis is a bishop chess, a white bishop chess. Think of a chess piece. And the black king, he may see as his king: the antichrist, who will also use Pope Francis, his instrument, as his chess piece, in order to convince the world that the chip is not the number of the beast!

Verily, Pope Francis is the false prophet of Obama.
Thus he also spoke in his speech, that the Muslims worship the one true living god. Also listen once to the message: ‘The new pope has already been chosen a long time ago!’ and to the message: ‘Pope Francis is the false prophet from Revelation!’ Verily, don’t be surprised! Obama is a Muslim too, and will never reveal his true nature. But the antichrist is known by his fruit!

Verily, and in regards to Syria, Assad had a major role in the extermination of Christians.
Prophet Benjamin Cousijnsen already revealed a lot to you in 2013, concerning Assad! Also, he has brought many of his own people to death with his regime, with poison gas. He has eliminated many proofs: poison gas back then, and now: important papers, pictures of horrific practices and torture! Verily, I reveal to you that Assad shall not escape his punishment, and shall be put to death and shall be cast into hell!

Verily, thus speaks the Lord:
Had I not warned you in 2013, on November 11th? Did not Prophet Benjamin Cousijnsen say to return, in the message entitled: ‘My people, My children, return to Israel!’? Still respond to this yet, in the whole world! Yeshua HaMashiach, Isa, Jesus Christ, is pointing that out to you! You were especially warned in Africa, and see what’s happening now! Now many say: “If only I had listened to Prophet Benjamin Cousijnsen!” But because of stubbornness, they were slain.

Verily!
The total takeover, the works of satan himself, are coming to the forefront more and more, day by day, because one knows and feels and thinks: ‘Not for long anymore, then the Son of Man will appear and take His children home’. So be on alert, because unexpectedly Yeshua HaMashiach, Isa, Jesus Christ, will strike!
I’m going now, spoke the messenger angel of God, Ruacha, Yeshu, Shalom!