All foretold prophecies of God about, among other things, the spreading of ISIS, which Prophet Benjamin Cousijnsen passed on so far, on behalf of YHWH, the God of Abraham, Isaac and Jacob, the only true God of Prophet Benjamin, were fulfilled down to the last detail, and are still being fulfilled rapidly! Furthermore, countries are again warned of attacks. Take these messages seriously! Examine it, for you will be amazed when you discover that everything fits and fulfilled itself, which was prophesied in advance! This is also for the unbelieving Thomases, because all the words of God are faithful and true, and are coming 100% from the Lord God, YHWH. So no wonder… what do I say? It remains extremely wonderful! But what will you do with it? (After clicking the video, wait for a moment until it plays.) 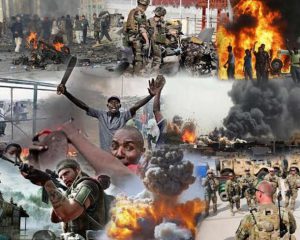 Hello, welcome! This is a revealing, prophetic and warning message of God, delivered by God’s true end-time Prophet of the last days, Benjamin Cousijnsen. The messenger angel of God brought this message, word for word, on May 26th, 2017, while Prophet Benjamin immediately wrote down all the words.

Shalom! I greet you in the almighty name of Yeshua HaMashiach, YHWH, Jesus Christ. Verily, my name is Revelado, a messenger angel of God.

I would just like to point out to you that Prophet Benjamin Cousijnsen’s revelations are true and are fulfilling themselves.
Listen once to the message from September 14, 2016, titled: ‘Spreading of ISIS fighters has been foretold in detail by God’s Prophet!’ and it has now been fulfilled. Verily, even in 2015, you had already been informed that thousands of ISIS fighters had disguised themselves, and that the alarm would be raised because of the large increase in passports and the disappearance of ISIS fighters without a trace. And guess what… where are they?

Verily, many of the ISIS fighters are ready to take over your country!
In Indonesia, they are fighting against the extreme ISIS fighters who want to take over Indonesia, as well as in the Philippines where the ISIS fighters want to seize power. They have already been able to capture women and children, and some men and leaders. ISIS is even busy using children of their own people under duress and threat! Verily, it is exactly like Prophet Benjamin had initially warned you already on behalf of the Lord, that ISIS wanted to carry out attacks worldwide. Attacks are taking place in Turkey, London, Brussels, Israel, Russia, United States, and so forth. And even the halal from the idols conquers your food and is available in the stores. This is prophetic and visible! And in the streets and businesses and schools as well, ISIS wants to take them over. There are also ISIS fighters with the police!

Verily, government leaders will be killed and many will flee.
This also counts for India. One will also carry out attacks in Dubai and kill many, and one will wish to take power because of the resources! Also, Spain will get to endure terrible attacks!

Verily, now don’t say that the total takeover and the contractions, or the great tribulation, the oppression, is not yet visible!
The biggest shock ever will be the Two Witnesses and the Rapture.
I’m going now, spoke the messenger angel of God, Ruacha, Yeshu, Shalom!