March 29 and 30, 2012  An angel of God showed Benjamin Cousijnsen tornadoes over the U.S.A. and New York, and told him why God is going to shake this continent. 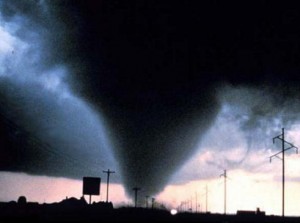 Dear listeners! On March 29th, 2012, Prophet Benjamin Cousijnsen received this vision from the Lord God. This is a prophetic vision because Benjamin only tells what the angel of the Lord told him, in order to tell it to the people as a warning: This is going to happen! Benjamin writes,

I was dreaming, when I received this vision.
I was in the air with the angel of God. I was surrounded with light; the sky was very dark with dark clouds and lightning and heavy thunderclaps. The air seemed to move very fast. I even could view the stream, as it circled with this huge tornado. Behind this huge tornado, I saw about eight other tornadoes. The first one was the biggest one and it reached even above the clouds. Each time the lightning seemed to hit something on the Earth.

I saw the U.S.A….
And how the American flag broke off from a building that seemed to me very important. People were looking anxious and astonished because of what was happening. I saw the Statue of Liberty in New York from the place in the air where I was, and where I observed and heard and could see everything of what was happening below. I saw floods flowing into America. There were many cars that were totally burning out. The messenger angel of God told me that these kind of catastrophes had happened before in the past.
While the angel continued speaking, I suddenly woke up, because I had to go to the toilet.

But the next night, on the 30th of March, this dream, this vision, just continued.
Again, I was in the air and saw America, New York, beneath me. I saw houses which were totally destroyed, but I saw also houses which were marked with a sign of blood in the form of a cross on the door. I think this is spiritual for Christians; these people’s homes were protected and had only minor damage.
The angel of the Lord said, Those people are being saved, because they really love God. There will be a lot of people, Benjamin, who will never enter into the gate of God.
In this dark air, I saw that there was something suddenly being written in luminous golden letters: words with lights, and I asked, “What are those letters?” because I couldn’t read it.
The angel smiled at me and said, Benjamin, it is Hebrew what is written there. Pass this on:

Matthew 7, verse 13  Enter in by the narrow gate; for wide is the gate and broad is the way that leads to destruction, and many are those who enter in by it.

Benjamin, God himself will take the wheel over this.
“Why this country?” I asked.
The angel said, You know, Benjamin, when you will hear of wars, then each country will rise against Israel, the children of God. Kingdom will be against kingdom, and they will try to destroy Israel!

I tell you this as an affirmation: Mark 13, verses 8 to 9  For nation will rise against nation, and kingdom against kingdom. There will be earthquakes in various places. There will be famines and troubles. These things are the beginning of birth pains. But watch yourselves, for they will deliver you up to councils. You will be beaten in synagogues. You will stand before rulers and kings for my sake, for a testimony to them.

Benjamin, pass this on:
Each land that does not remember Israel, and only hates and curses and mocks Israel, and even wants to exterminate it, shall be punished by God! Also, God gave this land, America, which is a thorn in the eye, to their reprobate mind!
The angel of God spoke further, I say the things this way, in order to let the foundations shake because the people are deaf, even in this manner. I know, Benjamin, that you don’t have the memory of a scholar, but I will help you to speak and to pass this on. Pass on Romans also.
“What do you mean?” I asked.

Then the angel said, Pass on God’s word:

Roman 1, verses 26 to 32  For this reason, God gave them up to vile passions. For their women changed the natural function into that which is against nature. Likewise also the men, leaving the natural function of the woman, burned in their lust toward one another, men doing what is inappropriate with men, and receiving in themselves the due penalty of their error. Even as they refused to have God in their knowledge, God gave them up to a reprobate mind, to do those things which are not fitting; being filled with all unrighteousness, sexual immorality, wickedness, covetousness, maliciousness; full of envy, murder, strife, deceit, evil habits, secret slanderers, backbiters, hateful to God, insolent, haughty, boastful, inventors of evil things, disobedient to parents, without understanding, covenant-breakers, without natural affection, unforgiving, unmerciful; who, knowing the ordinance of God, that those who practice such things are worthy of death, not only do the same, but also approve of those who practice them.

Shout or say this, Benjamin, and don’t fear, servant of God!
The anointing of God will cover you and the one at your side. Don’t forget above all: God is love; God has feelings. But mankind has to learn to surrender to the King of kings, Jesus Christ!
I asked, “But how can they stop all these catastrophes and sins and everything that is not good?”
Benjamin, you look like Abraham! This will be done in accordance to the word of God. He who repents will be saved. But there will be few, who will listen. Only in Him is security of salvation!
Speak out and say this, said the messenger angel of God:

Is the Kingdom of God not enough for you, that you are doing these things which are going in against God?
Repent! Hear the voice calling! Then I saw a light coming down to the angel and me, and a little later I woke up and wrote down everything that I had seen and heard. Then I went back to bed.