You will hear an important warning and informative prophecy. The United States among others, is warned against attacks from ISIS, the antichrist Trump ‘is into dump’, and one eats meat of children in Yemen. Hear and see what is coming! Though you are already impressed, you will be even more so, with this revealed message from the Lord God, YHWH. 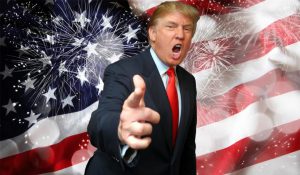 Hello, welcome! On January 31st, 2017, the messenger angel of God brought on the following warning message to end-time Prophet Benjamin Cousijnsen. This is a revealing message of God!

Verily, ISIS no longer calls “Allahu akbar!”, but “Donaldu akbar!”
Verily, United States, hear and see what is coming! Though you are already impressed, the more you will become so with this revealed message, which can be underlined and is revealed to you, that ISIS is preparing for attacks on the United States. Verily, even some ISIS fighters also have fighters with different nationalities, who can enter the United States just like that with their papers. And some are even among the people already, and live in the United States, and are only waiting for the order to carry out an attack! Verily, my name is Revelado and I am a messenger angel of God.

The antichrist Donald Trump creates chaos and turns the world upside down.
This was already foretold by God’s true end-time Prophet, Benjamin Cousijnsen.

Verily, the population in Arabian Yemen kills their own children, in order to be able to eat!
And cannibalism is present on a large scale. Because of the hunger they eat human flesh. Verily, if one would follow-up on the messages of God, then one would discover that everything has already been foretold by God’s true end-time Prophet, and that many ISIS fighters were among the refugees.

Due to the increasing hatred worldwide, mosques are facing many attacks!
And the contradiction is also that resident Muslims are willing to help ISIS refugees, in order to commit attacks worldwide.

Verily, the antichrist Trump ‘is into dump’!
The freedom of religion is also turned into hatred more and more. Donald Trump made great chaos, and even made a joke, by saying: “Yes, we can!” Where have we heard that before?
I’m going now, spoke the messenger angel of God, Ruacha, Yeshu, Shalom!