The kingdom of darkness has spread, and the hardness and indifference and takeover are tangible and visible in the daily lives of both Christians and non-believers. The fact that this would happen was already passed on to Prophet Benjamin Cousijnsen. See the reference to the message in question. Side note, also for the non-believers: Prophet Benjamin always only passes on what the God of Abraham, Isaac, and Jacob reveals to him through the messenger angels of God. It is therefore not surprising that all revelations are fulfilling themselves 100%! (After clicking the video, wait for a moment until it plays.) 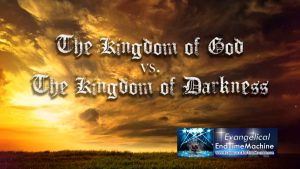 Hello, welcome! On March 26th, 2018, the messenger angel of God brought on the following message to end-time Prophet Benjamin Cousijnsen.

Shalom! I greet you in the almighty Name of Yeshua HaMashiach, YHWH, Jesus Christ. Verily, Kadosh, Holy, and Mighty is your Rabbouni, your Master and Lord, the King of kings! Verily, my name is Pedajasso, and I am a messenger angel of God.

John 12, verses 37 to 40  But though he had done so many signs before them, yet they didn’t believe in him, that the word of Isaiah the Prophet might be fulfilled, which he spoke, “Lord, who has believed our report? To whom has the arm of the Lord been revealed?” For this cause they couldn’t believe, for Isaiah said again, “He has blinded their eyes and he hardened their heart, lest they should see with their eyes, and perceive with their heart, and would turn, and I would heal them”.

Verily, don’t allow yourself to be taken over, but be strong in Yeshua HaMashiach, YHWH, Jesus Christ!

Galatians 4, verse 9  But now that you have come to know God, or rather to be known by God, why do you turn back again to the weak and miserable elemental principles, to which you desire to be in bondage all over again?

Verily!
Although many know Yeshua HaMashiach, YHWH, Jesus Christ, even many Christians have allowed themselves to be influenced by satan, who is using their brain through the adoption of lies and gossip, or through a brother or sister or family member, who has already been taken over by evil. Verily,

Galatians 5, verses 24 to 26  Those who belong to Christ have crucified the flesh with its passions and lusts. If we live by the Spirit, let’s also walk by the Spirit. Let’s not become conceited, provoking one another, and envying one another.

2 Thessalonians 2, verse 7  For the mystery of lawlessness already works. So far.

Some listen better to satan than to what Yeshua HaMashiach, YHWH, Jesus Christ, says through His true Prophet Benjamin Cousijnsen.

2 Timothy 4, verses 3 and 4  For the time will come when they will not listen to the sound doctrine, but, having itching ears, will heap up for themselves teachers after their own lusts; and will turn away their ears from the truth, and turn aside to fables.

And James 1, verses 21 and 22  Therefore, putting away all filthiness and overflowing of wickedness, receive with humility the implanted word, which is able to save your souls. But be doers of the word, and not only hearers, deluding your own selves.
And verse 26  If anyone among you thinks himself to be religious while he doesn’t bridle his tongue, but deceives his heart, this man’s religion is worthless.
And James 3, verses 10 and 11  Out of the same mouth comes forth blessing and cursing. My brothers, “but this also counts for sisters“, these things ought not to be so. Does a spring send out from the same opening fresh and bitter water?

Verily, repent and wake up!

Revelation 22, verse 6  He said to me, “These words are faithful and true. The Lord God of the spirits of the Prophets sent his angel to show to his bondservants the things which must happen soon”.

Verily, arm yourself, beloveds of the Lord, and examine yourself!

And Romans 12, verse 2  Don’t be conformed to this world, but be transformed by the renewing of your mind, so that you may prove what is the good, well-pleasing, and perfect will of God.
And verses 17 and 18  Repay no one evil for evil. Respect what is honorable in the sight of all men. If it is possible, as much as it is up to you, be at peace with all men.