THE MESSENGER ANGEL OF GOD SPEAKS, WHILE THEY ARE LOOKING IN VELDHOVEN TO A FIRE, IN DETAIL ABOUT THE CHRISTIAN PERSECUTION AT THIS TIME. IN SOMALIA ALSO MANY HOMES OF CHRISTIANS ARE BEING SET ON FIRE!

Published on Aug 4, 2012 by eindtijdspace 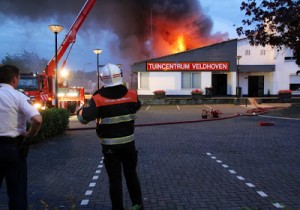 Hello! Benjamin writes that he received this message during the night of 14th July 2012.

Shalom Benjamin, follow me, wake up….
When I was waking up, the angel of God said: I greet you in the name of Yeshua HaMashiach, Jesus Christ. Benjamin, first have a drink of water. My name is Rubeni, I am going to transport you….

As I stepped out of bed, I was elsewhere… outside…
I saw fire-fighters everywhere, a few dozen or so. I saw them in action, but I also noticed that a building had collapsed because of the fire. It was a building of the Garden Center. There was lots and lots of heavy black smoke. I saw a signboard with the text, Garden Center Veldhoven, lying on the ground. The fire-fighters were wearing a white helmet with red stripes on them.
Benjamin, the angel of God said: Fires like this are awful, aren’t they! Do you know, Benjamin, for now go and sit on the bench, over there. In Somalia also many homes of Christians are being set on fire, said the angel of God. Many angels of God have often had to intervene and have saved many lives.

There is a severe persecution of Christians!
Also in Indonesia, Iran, Korea, Pakistan, China and many other lands. More than 50 countries are bearing the guilt for the killing of Christians, the angel of God said. And who prays for Israel?

Benjamin, in Psalm 36 is written, for the persecuted Christians, this:
In people that do not want anything to do with God, evil lurks deep in their heart. There is no fear of God. He soothes his conscience. He is blind to his sins, he abhors them not. What he says, is all lies and deceit. Wisdom and goodness are strangers to him. Brooding at night he makes his plans, he chooses the wrong way. He does not reject evil.

The persecuted Christian says:
Lord, your love reaches as high as the sky. Your faithfulness to the clouds is as immeasurable as the highest mountain. The judgements you make are as unfathomable as the deepest ocean. You set man and beast free. Your love, God, is a precious thing. Under your wings, we weak ones, are safe. We are refreshed in your temple. With a stream of gifts you quench us. With you is the source of life. In your light we live. O let your loving-kindness be on those that acknowledge you; and your righteousness on those that belong solely to you. Don’t allow us to be beaten down and trampled on, by proud people who want nothing to do with you. There they lie, the criminals, beaten, knocked down with no power to get up again.

You, who’re listening, do not pray only for your food, wife and children, said the angel.
Pray for all brothers and sisters, and you will be blessed. Using violence, radical Islamic groups are trying to force Christians to renounce their faith. Many Christians are being persecuted. They are forced under sadistic means to renounce Yeshua HaMashiach, Jesus Christ, said the messenger angel of God. People are even being raped and murdered.

The influence of the Muslims is already huge.
And with the stealth of a snake, they want to bring everything under their one belief.

John 16, verse 9 to 11, there it says: The sin is that they do not believe in Me. The right is, that I go to the Father, and you see me no more. The judgement is, that the ruler of this world is judged.
John 3, verse 16  For you is written there: “For God so loved the world, that He gave his only begotten Son, that whosoever believes in Him, should not perish, but have everlasting life”.

If you are a Muslim, God is Love, said the messenger angel of God.
He has sent His only begotten Son, Yeshua HaMashiach, Jesus Christ, into the world, to redeem us. He died, without guilt, on the cross. On the cross He bore our sins. He has taken our guilt upon himself. I tell you, my name is Rubeni, the messenger angel of God. Research the gospel and discover that Yeshua HaMashiach, Jesus Christ, is the true and only Way: the Truth and the Life.

He was the one, that called out on the cross:
Father, forgive them, they know not what they do. Also Jesus Christ died there, also for you. He calls on you now to repent. He was also the one, the only one who conquered death and after three days rose again. No one has ever imitated Him. After the three days many people saw Him. He has risen and lives! Yeshua HaMashiach is the Saviour for every soul and also for you. In Him there is no hate, God is Love, in Him there is no hate, with satan there is, God’s adversary.
Benjamin, I place you back in your bed and say to you, Sleep well!

In closing, read in your bible: Romans 8, verse 38 and verse 39, said the messenger angel of God.
Here it is written: For I am persuaded, that neither death, nor life, nor angels, nor principalities, nor powers, nor things present, nor things to come, nor height, nor depth, nor any other creature, shall be able to separate us from the love of God, which is in Christ Jesus our Lord.

I am going now, Benjamin, said the messenger angel of God.