A message of God: Also today in the end of days, the Light of the world, Yeshua HaMashiach, Jesus Christ, sent forth a Prophet, a man of God, into the world! He too now daily receives God’s words, as the old Prophets received the words of God, through God’s angels. Nothing has changed in this. God is the Same! spoke the messenger angel of God, commissioned by Yeshua HaMashiach, Jesus Christ of Nazareth. 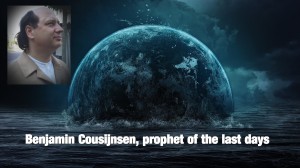 Hello, welcome! On April 17th, 2015, an angel of the Lord brought on word for word the following message of God to Benjamin Cousijnsen, end-time Prophet of the last days.

John 1, verse 3 to 10  All things were made through him. Without him was not anything made that has been made. In him was life, and the life was the light of men. The light shines in the darkness, and the darkness hasn’t overcome it. There came a man, sent from God, whose name was John. The same came as a witness, that he might testify about the light, that all might believe through him. He was not the light, but was sent that he might testify about the light. The true light that enlightens everyone was coming into the world. He was in the world, and the world was made through him, and the world didn’t recognize him.

Verily, kadosh is Yeshua HaMashiach, Jesus Christ, the Son of God!
Verily, I am a messenger angel of God and my name is Candura.

John 8, verse 12  Again, therefore, Jesus spoke to them, saying, “I am the light of the world. He who follows me will not walk in the darkness, but will have the light of life”.

Verily, many Prophets came and brought the truth of God.
But they too were not always understood, because one loved the darkness and followed a false light, that was not the Light in the darkness! Verily, also today in the end of time, the Light of the world, Yeshua HaMashiach, Jesus Christ, brought a Prophet, a man of God, whose name is Prophet Benjamin Cousijnsen. He too receives angels, as the ancient Prophets did, who come 100% from God. Nothing has changed in this; God is the Same! Verily, and He sent one of His heavenly Prophets, in order to perform the task in the end of days. And he shared both what they wanted and what they did not want to hear!

Verily, many are bothered by Prophet Benjamin Cousijnsen.
This was also the case with Yeshua HaMashiach, Jesus Christ, who also came as a light in the darkness!

Jeremiah 1, verse 4 to 8  Now the word of the LORD came to me, saying, Before I formed you in the belly I knew you, and before you came forth out of the womb I sanctified you; I have appointed you a Prophet to the nations. Then said I, Ah, Lord GOD! behold, I don’t know how to speak; for I am a child. But the LORD said to me, Don’t say, I am a child; for to whoever I shall send you, you shall go, and whatever I shall command you, you shall speak. Don’t be afraid because of them; for I am with you to deliver you, says the LORD.
And verse 17  You therefore gird up your waist, and arise, and speak to them all that I command you: don’t be dismayed at them, lest I dismay you before them.
And verse 19  They shall fight against you; but they shall not prevail against you: for I am with you, says the LORD, to deliver you.

And Luke 4, verse 20 to 30  The eyes of all in the synagogue were fastened on him. He began to tell them, “Today, this Scripture has been fulfilled in your hearing.” All testified about him, and wondered at the gracious words which proceeded out of his mouth, and they said, “Isn’t this Joseph’s son?” He said to them, “Doubtless you will tell me this parable, ‘Physician, heal yourself! Whatever we have heard done at Capernaum, do also here in your hometown.'” He said, “Most certainly I tell you, no Prophet is acceptable in his hometown. But truly I tell you, there were many widows in Israel in the days of Elijah, when the sky was shut up three years and six months, when a great famine came over all the land. Elijah was sent to none of them, except to Zarephath, in the land of Sidon, to a woman who was a widow. There were many lepers in Israel in the time of Elisha the Prophet, yet not one of them was cleansed, except Naaman, the Syrian.” They were all filled with wrath in the synagogue, as they heard these things. They rose up, threw him out of the city, and led him to the brow of the hill that their city was built on, that they might throw him off the cliff. But he, passing through the midst of them, went his way.

Verily, support God’s beloved with your prayer.
He too is only a man who serves God, as one of the last witnesses in the end of days. Amen!
I’m going now, Ruacha, Yeshu, Shalom! spoke the messenger angel of God, and disappeared.