Revealing and prophetic message of God: Verily, at the end of the thousand years of glory and hallelujah and peace on earth, satan will be released and once again create an imperfect situation. Read or listen to the entire message. 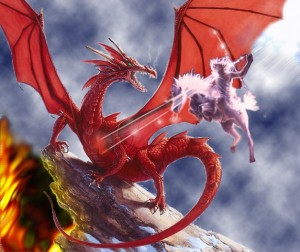 Hello, welcome! On January 20th, 2016, the angel of the Lord brought on the following revealing and prophetic message of God to end-time Prophet Benjamin Cousijnsen.

Revelation 20, verse 1 to 3  I saw an angel coming down out of heaven, having the key of the abyss and a great chain in his hand. He seized the dragon, the old serpent, which is the devil and satan, who deceives the whole inhabited earth, and bound him for a thousand years, and cast him into the abyss, and shut it, and sealed it over him, that he should deceive the nations no more, until the thousand years were finished. After this, he must be freed for a short time.

Verily, many will say: “Why for a thousand years? Trample that snake, for good!”
Verily, if God brings you into that thousand year Kingdom of Peace, where there is no evil, but only a glorious era, one will marvel at the perfection!

Isaiah 11, verse 9  They will not hurt nor destroy in all my holy mountain; for the earth will be full of the knowledge of the LORD, as the waters cover the sea.
And Isaiah 35, verse 1 to 7  The wilderness and the dry land will be glad. The desert will rejoice and blossom like a rose. It will blossom abundantly, and rejoice even with joy and singing. Lebanon’s glory will be given to it, the excellence of Carmel and Sharon. They will see the glory of the LORD, the excellence of our God. Strengthen the weak hands, and make firm the feeble knees. Tell those who have a fearful heart, “Be strong. Don’t be afraid. Behold, your God will come with vengeance, God’s retribution. He will come and save you. Then the eyes of the blind will be opened, and the ears of the deaf will be unstopped. Then the lame man will leap like a deer, and the tongue of the mute will sing; for waters will break out in the wilderness, and streams in the desert. The burning sand will become a pool, and the thirsty ground springs of water. Grass with reeds and rushes will be in the habitation of jackals, where they lay.
And Isaiah 65, verse 17 to 23  “For, behold, I create new heavens and a new earth; and the former things will not be remembered, nor come into mind. But be glad and rejoice forever in that which I create; for, behold, I create Jerusalem to be a delight, and her people a joy. I will rejoice in Jerusalem, and delight in my people; and the voice of weeping and the voice of crying will be heard in her no more. “No more will there be an infant who only lives a few days, nor an old man who has not filled his days; for the child will die one hundred years old, and the sinner being one hundred years old will be accursed. They will build houses, and inhabit them. They will plant vineyards, and eat their fruit. They will not build, and another inhabit. They will not plant, and another eat: for the days of my people will be like the days of a tree, and my chosen will long enjoy the work of their hands. They will not labor in vain, nor give birth for calamity; for they are the offspring of the LORD’s blessed, and their descendants with them.
And Isaiah 11, verse 6 to 8  The wolf will live with the lamb, and the leopard will lie down with the young goat; The calf, the young lion, and the fattened calf together; and a little child will lead them. The cow and the bear will graze. Their young ones will lie down together. The lion will eat straw like the ox. The nursing child will play near a cobra’s hole, and the weaned child will put his hand on the viper’s den.

Verily, at the end of the thousand years of glory and hallelujah and peace on earth, satan will be released!

Revelation 20, verse 7 to 10  And after the thousand years, satan will be released from his prison, and he will come out to deceive the nations which are in the four corners of the earth, Gog and Magog, to gather them together to the war; the number of whom is as the sand of the sea. They went up over the width of the earth, and surrounded the camp of the saints, and the beloved city. Fire came down out of heaven from God, and devoured them. The devil who deceived them was thrown into the lake of fire and sulfur, where the beast and the false prophet are also. They will be tormented day and night forever and ever.

Due to the imperfect situation that has arisen, because satan has been released again, many will fall back, and turn against God and hate God.
As things went wrong in Paradise, so will this repeat itself with the Kingdom of Peace!

After this period of trial and loyalty to God will have been completed, the Great Judgment will come.
And after the snake has been cast into the lake of fire for good, there will be a feast that has never been so beautiful, in heaven and on earth. Because the snake will be tormented for good and forever! And a new earth will arise, and the old earth will disappear and make way for the new heavens and the new earth that will exist forever, in which only justice will prevail!

Revelation 20, verse 14 and 15  Death and Hades were thrown into the lake of fire. This is the second death, the lake of fire. If anyone was not found written in the book of life, he was cast into the lake of fire.
And Revelation 21, verse 1 to 4  I saw a new heaven and a new earth: for the first heaven and the first earth have passed away, and the sea is no more. I saw the holy city, New Jerusalem, coming down out of heaven from God, prepared like a bride adorned for her husband. I heard a loud voice out of heaven saying, “Behold, God’s dwelling is with people, and he will dwell with them, and they will be his people, and God himself will be with them as their God. He will wipe away from them every tear from their eyes. Death will be no more; neither will there be mourning, nor crying, nor pain, any more. The first things have passed away”.
And verse 7 and 8  “He who overcomes, I will give him these things. I will be his God, and he will be my son “and daughter“. But for the cowardly, unbelieving, sinners, abominable, murderers, fornicators, sorcerers, idolaters, and all liars, their part is in the lake that burns with fire and sulfur, which is the second death.”