Prophetic and revealing message of God. The angel of the Lord, Michaël, spoke: Verily, remember what I tell you now! Many will die through the two witnesses. 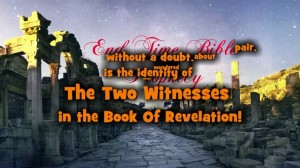 Hello, welcome! On January 6th, 2016, the messenger angel of God brought on this revealing and prophetic message of God to end-time Prophet Benjamin Cousijnsen.

Verily, Israel!
Kadosh, holy is the King of the Jews, and very powerful, who will fulfill the law! Thus speaks the Lord, El Elohím, Adonai.

Matthew 5, verse 17  Don’t think that I came to destroy the law or the Prophets. I didn’t come to destroy, but to fulfill.

Revelation 22, verse 6  He said to me, “These words are faithful and true. The Lord God of the spirits of the Prophets sent his angel to show to his bondservants the things which must happen soon”.
Verily, my name is Michaël, a messenger angel of God.

Don’t be surprised that many people find Prophet Benjamin Cousijnsen more and more a thorn in their eye!

Verily!
Many of them, to whom Prophet Benjamin Cousijnsen is a thorn in the eye, will be church leaders and apostles and Prophets and evangelists, from all kinds of religions. And even the world leaders will introduce a present day for the churches and the people, for commemoration.

Revelation 11, verse 8 and 9  Their dead bodies will be in the street of the great city, which spiritually is called Sodom and Egypt, where also their Lord was crucified. From among the peoples, tribes, languages, and nations people will look at their dead bodies for three and a half days, and will not allow their dead bodies to be laid in a tomb.

Verily!
One of the two witnesses is precisely that person with his olive green eyes, who was now already often among the Jewish people as a scout, commissioned by the God of Abraham and Isaac and Jacob. Verily, remember this, what I tell you now! Many will die through the two witnesses.

Revelation 11, verse 5 and 6  If anyone desires to harm them, fire proceeds out of their mouth and devours their enemies. If anyone desires to harm them, he must be killed in this way. These have the power to shut up the sky, that it may not rain during the days of their prophecy. They have power over the waters, to turn them into blood, and to strike the earth with every plague, as often as they desire.

Verily, the two witnesses will turn the world upside down!
Little by little, there will also be many who have discovered, throughout the messages, the full truth more and more, and acknowledge that this is the full truth. Verily, this message has been spoken to you. And whoever doesn’t want to hear this, and rejects the truth, will perish!
I’m going now, spoke the messenger angel of God, Ruacha, Yeshu, Shalom!