Due to the events we can see everything developing itself. 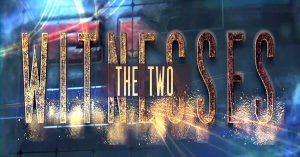 Hello, very welcome! On December 29th, 2016, Prophet Benjamin Cousijnsen received the following message from a messenger angel of God, which I’d like to share with you.

Shalom! I greet you in the almighty name of Yeshua HaMashiach, YHWH, Jesus Christ, the only Son of God. Verily, I am Thunder, a powerful angel of the Lord and the messenger angel of God.

Verily!
And in the name of the King of kings, I pass on to you the words of the Almighty, YHWH, the God of Abraham, Isaac and Jacob, the God of all flesh.

O woe to them!
Especially those who trumpeted while slandering and shouting, and despised My Two Witnesses, and did not take them seriously! For they allow themselves to be used by the principalities and powers and world rulers of the darkness, the evil spirits, the fallen angels, in order to ensure, by means of magic, that many who know them, the Two Witnesses, including church leaders and churchgoers, are set up against them and ensure that they, the Two Witnesses, are hated. Some Christians are part of this evil and are the cause of what happens to the Two Witnesses.

Revelation 11, verse 7 and 8  When they have finished their testimony, the beast that comes up out of the abyss will make war with them, and overcome them, and kill them. Their dead bodies will be in the street of the great city, which spiritually is called Sodom and Egypt, where also their Lord was crucified.

The truth is that these people allowed themselves to be enchanted and deceived and blinded,
so that they started to see the lies about the Two Witnesses for truth. However, they are blind sheep and they are despised by God, and they will be punished because of their unbelief and slander! It is better – if you fall among them – that you repent, on time!
I’m going now, spoke the messenger angel of God, Ruacha, Yeshu, Shalom!