MARCH 25, 2013  IN THIS MESSAGE, WHICH WAS DIRECTLY BROUGHT THROUGH THE MESSENGER ANGEL OF GOD, THE LORD SPEAKS ABOUT TITHES, DIRECTLY FROM THE LORD HIMSELF! IN THE NAME OF JESUS CHRIST, THIS MESSAGE WAS PASSED ON! 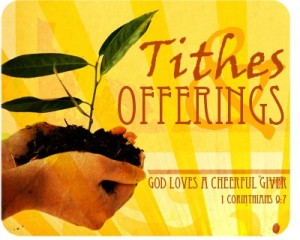 Hello, welcome! On March 25th, 2013, the messenger angel of God brought on the following message to Benjamin Cousijnsen.

Shalom! I greet you in the name of Yeshua HaMashiach, Jesus Christ. My name is Charia, Prophet Benjamin Cousijnsen, and I am a messenger angel of God.

Beloveds in Yeshua HaMashiach, Jesus Christ, and also you, listen attentively and discover that the Holy Spirit will touch you, while you think about this message.
Yeshua once saw a poor widow…

Luke 21, verse 1 to 4, and Acts 4, verse 33 to 34  Read this aloud.
In Luke 21, verse 1 to 4 it is written: He looked up, and saw the rich people who were putting their gifts into the treasury. He saw a certain poor widow casting in two small brass coins. He said, “Truly I tell you, this poor widow put in more than all of them, for all these put in gifts for God from their abundance, but she, out of her poverty, put in all that she had to live on.”
Acts 4, verse 33 to 35  Here it is written: With great power, the apostles gave their testimony of the resurrection of the Lord Jesus. Great grace was on them all. For neither was there among them any who lacked, for as many as were owners of lands or houses sold them, and brought the proceeds of the things that were sold, and laid them at the apostles’ feet.

I tell you from Acts 5 verse 1 and 2, spoke the messenger angel of God: But a certain man named Ananias, with Sapphira, his wife, sold a possession, and kept back part of the price, his wife also being aware of it, and brought a certain part, and laid it at the apostles’ feet.

Isaiah 63, verse 10  Read this aloud. Here it is written: But they rebelled, and grieved his holy Spirit: therefore he was turned to be their enemy, and himself fought against them.
The messenger angel of God spoke further,

Acts 5, verse 3 to 4  But Peter said, “Ananias, why has satan filled your heart to lie to the Holy Spirit, and to keep back part of the price of the land? “Let your promise be yes, and your no, no, to the Holy Spirit”, said the messenger angel of God. While you kept it, didn’t it remain your own? After it was sold, wasn’t it in your power? How is it that you have conceived this thing in your heart? You haven’t lied to men, but to God.”

1 Corinthians 3, verse 16 and 17  Read this aloud. Here it is written: Don’t you know that you are a temple of God, and that God’s Spirit lives in you? If anyone destroys the temple of God, God will destroy him; for God’s temple is holy, which you are.
The messenger angel of God spoke further,

Acts 5, verse 5 to 6  Ananias, hearing these words, fell down and died. Great fear came on all who heard these things. The young men arose and wrapped him up, and they carried him out and buried him.

Ephesians 4, verse 30  Read this aloud. Here it is written: Don’t grieve the Holy Spirit of God, in whom you were sealed for the day of redemption.

Acts 5, verse 7 to 9  About three hours later, his wife, not knowing what had happened, came in. Peter answered her, “Tell me whether you sold the land for so much.” She said, “Yes, for so much.” But Peter asked her, “How is it that you have agreed together to tempt the Spirit of the Lord? Behold, the feet of those who have buried your husband are at the door, and they will carry you out.”

Malachi 3, verse 7 to 10, and Acts 5, verse 10 to 11  Read this aloud.
Malachi 3, verse 7 to 10  Here it is written: “From the days of your fathers you have turned aside from my ordinances, and have not kept them. Return to me, and I will return to you,” says the LORD of hosts. “But you say, ‘How shall we return?’  Will a man rob God? Yet you rob me! But you say, ‘How have we robbed you?’ In tithes and offerings. You are cursed with the curse; for you rob me, even this whole nation. Bring the whole tithe into the store-house, that there may be food in my house, and test me now in this,” says the LORD of hosts, “if I will not open you the windows of heaven, and pour you out a blessing, that there shall not be room enough for”.
Acts 5, verse 10 to 11  Here it is written: She fell down immediately at his feet, and died. The young men came in and found her dead, and they carried her out and buried her by her husband. Great fear came on the whole assembly, and on all who heard these things.
The messenger angel of God spoke further,

Verily, he who expresses lies will perish!

Matthew 6, verse 3 and 4  Read this aloud. Here it is written: But when you do merciful deeds, don’t let your left hand know what your right hand does, so that your merciful deeds may be in secret, then your Father who sees in secret will reward you openly.

John 3, verse 17  For God didn’t send his Son into the world to judge the world, but that the world should be saved through him.

John 16, verse 29  Read this aloud. Here it is written: His disciples said to him, “Behold, now you speak plainly, and speak no figures of speech”.
The messenger angel of God spoke further,