And yeah, well, it was only a little bit of disobedience, you know. But it was still stealing! (After clicking the video, wait for a moment until it plays.) 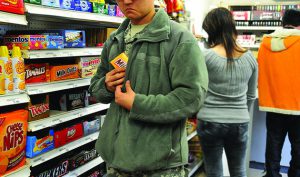 Hello, welcome! On January 25th, 2018, the messenger angel of God brought on the following message to end-time Prophet Benjamin Cousijnsen.

Shalom! I greet you in the almighty Name of Yeshua HaMashiach, YHWH, Jesus Christ. Verily, my name is Rafaël, a messenger angel of God.

Verily, when Arjan was still a child, he did something that God has an aversion to:
stealing from the cookie jar! Well, it was just a cookie. And in the store he opened a bag of chips and stuffed his mouth, and walked on to a crate of lemonade, where he took a bottle in order to wash away the remainder. Yeah, well, it was only a little bit of disobedience, you know. But it was still stealing!

When he had to go to school and didn’t feel like walking, he stole a bike.
He had also helped his mother once by going to the store for her, and he threw away the receipt so that his mother didn’t see that he had eaten french fries too! Well, it was just a tray of fries, full of french fries! Verily, you shall not steal! But the temptation was great.

Verily, his life consisted of stealing, and he did not have remorse.
Even years later he hadn’t confessed this, despite the fact that years later he gave his life to the Lord and went to church. But he had never opened his mouth and confessed this – his sins – not even when he was doing the bookkeeping and withheld money from the collection! Well, it was only a little bit, you know!

Verily, confess all your sins with a heart full of remorse!