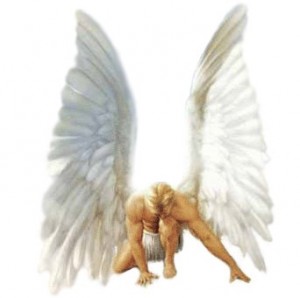 Hello, welcome! On February 4th, 2013, the messenger angel of God brought on the following message to Prophet Benjamin Cousijnsen.

Shalom! I greet you in the mighty name of Yeshua HaMashiach, Jesus Christ. Verily, verily, I tell you, Prophet Benjamin Cousijnsen, my name is Measraël. I am very pleased to meet you.

In heaven it is even being spoken about you and the workers of the last days.
I am a messenger angel of God, and I insist, you there who’re listening, that you do not worship angels! Also Benjamin does not worship and honor us. Listen carefully!

Angel worshipers, thus it is written, and thus speaks the Almighty to you again!

Colossians 2, verse 18  Let no one rob you of your prize by a voluntary humility and worshipping of the angels, dwelling in the things which he has not seen, vainly puffed up by his fleshly mind.

I am Measraël, I’m dressed in shiny, spotless, wonderful fine linen.
My hair is light shiny, very light blond. My collar is of heavenly gold, and my wide belt, this one is decorated with heavenly, precious stones, with rubies and little diamonds, and many unknown stones. My sandals are also of gold.

Judges 13, verse 6  Then the woman came and told her husband, saying:… Pay attention! said the messenger angel of God… A man of God came to me, and his face was like the face of the angel of God, very awesome; and I didn’t ask him whence he was, neither did he tell me his name.

Acts 7, verse 38  This is he who was in the assembly in the wilderness with the angel that spoke to him on Mount Sinai, and with our fathers, who received living oracles to give to us.

Benjamin comes from the tribe of Benjamin and passes on God’s words, also every word and every letter.

1 Timothy 4, verse 1  But the Spirit says expressly that in later times some will fall away from the faith, paying attention to seducing spirits and doctrines of demons.

Also I tell you,

Leviticus 19, verse 4  Don’t turn to idols, nor make molten gods for yourselves. I am the LORD your God.

James 5, verse 19 and 20  Brothers “and sisters”, added the messenger angel of God, if any among you wanders from the truth, and someone turns him back, let him know that he who turns a sinner from the error of his way will save a soul from death, and will cover a multitude of sins.

Verily, verily, I tell you, I am a messenger angel of God and warn you seriously!
Worship to whom it is due, who gave His life for you in order to save you, truly from hell! Bend only for Him, Yeshua HaMashiach, Jesus Christ, the Son of God!

John 3, verse 16 and verse 18, and verse 35 and 36  Read this aloud. Here it is written: For God so loved the world, that he gave his only begotten Son, that whoever believes in him should not perish, but have eternal life. He who believes in him is not judged. He who doesn’t believe has been judged already, because he has not believed in the name of the one and only Son of God.
One who believes in the Son has eternal life, but one who disobeys the Son won’t see life, but the wrath of God remains on him. The messenger angel of God spoke further,

I’m going now, and you there, Focus on Yeshua HaMashiach, Jesus Christ, and ask for forgiveness!
I bless you now in His name: Ruacha, Yeshu, Shalom!