A MESSAGE OF GOD, 100% COMING FROM GOD, THE GOD OF ABRAHAM, ISAAC AND JACOB. VERILY! THE MEDIA IS IN THE HANDS OF SATAN, IN ORDER TO DECEIVE AND SEDUCE MANY! 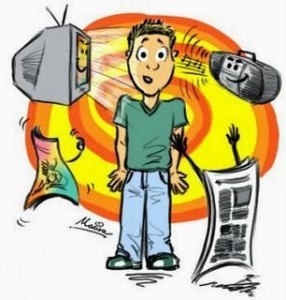 Shalom! I greet you in the wonderful name of Yeshua HaMashiach, Jesus Christ. Verily, verily, I tell you, I am a messenger angel of God, and my name is Pedasa. Verily, listen attentively.

Read aloud: John 12, verse 46  Here it is written: I have come as a light into the world, that whoever believes in me may not remain in the darkness.
And verse 48  He who rejects me, and doesn’t receive my words, has one who judges him. The word that I spoke, the same will judge him in the last day.
The messenger angel of God spoke further,

Verily! The media tries to influence your thoughts by ridiculing Christians, so that they are hated.
Also the truth is twisted!

1 Corinthians 3, verse 13  Here it is written: Each man’s work will be revealed. For the Day will declare it, because it is revealed in fire; and the fire itself will test what sort of work each man’s work is.
And verse 19 to 21 For the wisdom of this world is foolishness with God. For it is written, “He has taken the wise in their craftiness.” And again, “The Lord knows the reasoning of the wise, that it is worthless.” Therefore let no one boast in men. For all things are yours.
The messenger angel of God spoke further,

Verily, the media is in the hands of satan, in order to deceive and seduce many!

Read aloud: Ephesians 5, verse 6 to 13  Here it is written: Let no one deceive you with empty words. For because of these things, the wrath of God comes on the children of disobedience. Therefore don’t be partakers with them. For you were once darkness, but are now light in the Lord. Walk as children of light, for the fruit of the Spirit is in all goodness and righteousness and truth, proving what is well-pleasing to the Lord. Have no fellowship with the unfruitful works of darkness, but rather even reprove them. For the things which are done by them in secret, it is a shame even to speak of.

Verily, every star that influences you, and brought down many people through lies, will not go unpunished!
Thus speaks the Lord Yeshua HaMashiach, Jesus Christ.

Read aloud: Matthew 7, verse 23  Here it is written: Then I will tell them, ‘I never knew you. Depart from me, you who work iniquity.’
The messenger angel of God spoke further,

Verily, you there, Repent and open your eyes, and see and hear!

1 Corinthians 2, verse 6 and 7  Here it is written: We speak wisdom, however, among those who are full grown; yet a wisdom not of this world, nor of the rulers of this world, who are coming to nothing. But we speak God’s wisdom in a mystery, the wisdom that has been hidden, which God foreordained before the worlds for our glory.
And verse 9 to 15  But as it is written, “Things which an eye didn’t see, and an ear didn’t hear, Which didn’t enter into the heart of man, These God has prepared for those who love him.” But to us, God revealed them through the Spirit. For the Spirit searches all things, yes, the deep things of God. For who among men knows the things of a man, except the spirit of the man, which is in him? Even so, no one knows the things of God, except God’s Spirit. But we received, not the spirit of the world, but the Spirit which is from God, that we might know the things that were freely given to us by God. Which things also we speak, not in words which man’s wisdom teaches, but which the Holy Spirit teaches, comparing spiritual things with spiritual things. Now the natural man doesn’t receive the things of God’s Spirit, for they are foolishness to him, and he can’t know them, because they are spiritually discerned. But he who is spiritual discerns all things, and he himself is judged by no one. The messenger angel of God spoke further,

Verily, beloveds of the Lord, Arm yourself!

Read aloud: 1 Corinthians 3, verse 16 and 17  Here it is written: Don’t you know that you are a temple of God, and that God’s Spirit lives in you? If anyone destroys the temple of God, God will destroy him; for God’s temple is holy, which you are.

1 Thessalonians 4, verse 7 and 8  Here it is written: For God called us not for uncleanness, but in sanctification. Therefore he who rejects doesn’t reject man, but God, who has also given his Holy Spirit to you.
The messenger angel of God spoke further,

Verily, in Matthew 6, verse 21 it says: For where your treasure is, there your heart will be also. “Verily, thus speaks the Lord.”

Always ask for protection, when you are involved with the media as a Christian.

John 3, verse 16 to 21  Here it is written: For God so loved the world, that he gave his only begotten Son, that whoever believes in him should not perish, but have eternal life. For God didn’t send his Son into the world to judge the world, but that the world should be saved through him. He who believes in him is not judged. He who doesn’t believe has been judged already, because he has not believed in the name of the only begotten Son of God. This is the judgment, that the light has come into the world, and men loved the darkness rather than the light; for their works were evil. For everyone who does evil hates the light, and doesn’t come to the light, lest his works would be exposed. But he who does the truth comes to the light, that his works may be revealed, that they have been done in God.
The messenger angel of God spoke further,

Verily, Yeshua HaMashiach, Jesus Christ, wants to point out to you, who’re listening, that the book will be sent to you soon.
It will now be printed first. And the sale stands still now for a moment, so that the foundation can focus on the registration for the book ‘RUACHA, YESHU, SHALOM!’ Verily, those who ordered this book, can have a free T-shirt. However, you need then to please pass on your size.

Verily, maybe you just only want a T-shirt, in order to evangelize.
With a gift of at least 25 Euros, it will be sent to you. I’m going now, Ruacha, Yeshu, Shalom! spoke the messenger angel of God, and disappeared.