Here follows a prophetic dream vision, which was written down commissioned by Yeshua HaMashiach, YHWH, Jesus Christ, and passed on by His servant, Prophet Benjamin Cousijnsen. (After clicking the video, wait for a moment until it plays.) 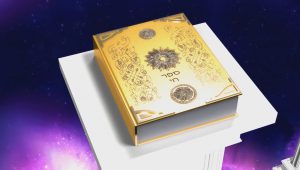 Shalom, with Prophet Benjamin Cousijnsen. And I greet you in the almighty name of Yeshua HaMashiach, YHWH, Jesus Christ.

When I slept last night, I saw the following:
I saw many believers on a road. Some had a Bible in their hand. And I walked on and also saw Pope Francis, and I saw nuns with little crosses around their neck, and I saw church leaders dressed in pink. Furthermore, I saw a lot of Catholics with a stave, with a large image of Mary on it, with an ugly baby that looked more like a little devil than a baby, which had to represent Jesus! I saw that this huge procession went one way on a wide road.

I walked alongside this procession and kept order over it,
with the task that all believers and these people – believers and non-believers – had to stay on this road and had to move along. I also saw Buddhists, Buddha worshipers, and people of many religions. I also saw familiar faces who had ever served the Lord in the Evangelicalendtimemachine.com, and who had allowed themselves to be influenced in order to destroy God’s work! I will not mention the names because they will remember this message. And those who called “Repent!” will be there, on this road, as well. I saw so much, and I walked forward and also stretched out my wings.

I also saw Theresa walk on the other side,
who did the same, and who also, just like me, had the task to guard all these souls and to ensure that all these people would continue walking in a procession on this road. Prophetess Theresa and I secured this road, commissioned by the Lord, Yeshua HaMashiach, YHWH, Jesus Christ. I saw a high fire, and there were two angels, one to the left and one to the right of it!

And I saw a sort of pillar with an open book on it.
Two angels of God also stood there. Their verdict was announced there! And in the presence of many thousands of angels, all these souls were shown and told what they had done, via an image projection. I want to share this with you.

This dream is prophetic, so that some can still repent!
You have been warned, and I have shared it with you.

And I say to you, Ruacha, Yeshu, Shalom!