A message of God: Verily, some say, “It doesn’t make any difference, does it, whether I believe or not in Jesus Christ or in Mohammed?” A special message in which the angel of the Lord also refers to passages from the Quran, if you wish to investigate this, in comparison with God’s truth written in the Bible! 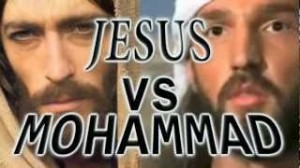 Hello, very welcome! On October 23rd, 2014, a messenger angel of God brought on, word for word, on behalf of the God of Abraham, Isaac and Jacob, the following message to end-time Prophet Benjamin Cousijnsen.

Shalom! I greet you in the wonderful name of Yeshua HaMashiach, Jesus Christ. Verily, my name is Kamegai and I am a messenger angel of God.

Verily, you do so much for others, and you have a family!
Verily, John the Baptist had said, just like Prophet Benjamin Cousijnsen, that one must repent and that God is not satisfied. Many will say, “But I’m a good person toward others, and I don’t sin and don’t swear and don’t lie!”

Romans 3, verses 23 and 24  For all have sinned, and fall short of the glory of God; being justified freely by his grace through the redemption that is in Christ Jesus.

Verily, some say, “It doesn’t make any difference, does it, whether I believe or not in Jesus Christ or in Mohammed?”
Verily, the difference is this: Yeshua HaMashiach, Jesus Christ, died on the cross and carried in love your sins upon himself.

Read aloud: John 3, verses 16 to 18  There it is written: For God so loved the world, that he gave his one and only Son, that whoever believes in him should not perish, but have eternal life. For God didn’t send his Son into the world to judge the world, but that the world should be saved through him. He who believes in him is not judged. He who doesn’t believe has been judged already, because he has not believed in the name of the one and only Son of God.

And in your Bible it is also written in Luke 23, verse 34, what His last words were:
Jesus said, “Father, forgive them, for they don’t know what they are doing.” So far.

The last words of Mohammed were:
“May Allah curse the Jews and the Christians, for they built places of worship…” So far.
It further also says in Bukhari, Volume 1, Number 427, that Mohammed died in the hands of his wife. He was poisoned! Mohammed was full of hate and could not give that which Yeshua HaMashiach, Jesus Christ, gave.

Verily, so He said: Love your neighbor as yourself!
He also had no slaves, but Mohammed did. He, Mohammed, owned and sold many slaves, and also said that Allah allowed him and his Muslim followers to have intercourse with their female slaves, when the men wanted that. I refer to the Quran, spoke the messenger angel of God: Surah 33, verse 50 and 52, and Surah 23, verse 5, and Surah 70, verse 30. Mohammed approved enslavement. Furthermore, he had in Surah 33, verse 26, the slaughter of about 800 Jewish male prisoners upon his name, and he carried out executions and severe torture. See the life of Mohammed on page 551 and 552 and 515 of the Quran.