JUN 1, 2012  PROPHETIC: THE ANGEL OF GOD CALLS TO REPENTANCE TO YESHUA HAMASIACH, JESUS CHRIST! EVERYTHING IS ALREADY READY IN HEAVEN! THE INVISIBLE PLANET AND ENEMY ARE LOCATED JUST ABOVE THE EARTH. 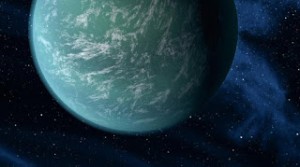 Hello all! On the night of June 1st, 2012, Benjamin Cousijnsen received this prophetic dream vision of Jesus Christ, by the messenger angel of the Lord God.

Shalom, Benjamin! My name was announced already. It’s not about me, but about who stands far above me, Yeshua HaMashiach. My name is Michaël. I’m taking you along, make haste.
I got up out of bed and stood also immediately in the airspace.
Benjamin, said Michaël, do you still know it? Ben-Jamin means ‘son of the right hand’.
Benjamin, follow me, follow me through space…

Look, this is a blue planet; the name is Kepler.
“It looks like our planet”, I said.
Benjamin, it is 2.4 times larger than your Earth. I also give you a prophetic Bible scripture with it, that is,

Romans 8, verse 24  For we were saved in hope, but hope that is seen is not hope. For who hopes for that which he sees?

They all look for extraterrestrial life, but whom they should be looking for, they do not look for at all!

John 8, verse 12  Again, therefore, Jesus spoke to them, saying, “I am the light of the world. He who follows me will not walk in the darkness, but will have the light of life.”

Also, they claim that there was no contact at all.
Benjamin, many planets are being contacted, like Venus, Mars, Pluto, etcetera. I tell you this,

Ephesians 6, verse 12 to 13  For our wrestling is not against flesh and blood, but against the principalities, against the powers, against the world’s rulers of the darkness of this age, and against the spiritual forces of wickedness in the heavenly places.

I tell you, you don’t think you’ll experience this, do you, children of God?
One says: ‘Within four billion years the Milky Way will collide frontally with the Andromeda galaxy’.

Isaiah 14, verse 13 to 15  You said in your heart, “I will ascend into heaven! I will exalt my throne above the stars of God! I will sit on the mountain of assembly, in the far north! I will ascend above the heights of the clouds! I will make myself like the Most High!”

The time is very near; Jesus Christ, whom you also call Yeshua HaMashiach, does not wait 4 billion years anymore!
You will be very surprised, for He is coming very soon!

Revelation 6, verse 14 to 17  The sky was removed like a scroll when it is rolled up. Every mountain and island were moved out of their places. The kings of the earth, the princes, the commanding officers, the rich, the strong, and every slave and free person, hid themselves in the caves and in the rocks of the mountains. They told the mountains and the rocks, “Fall on us, and hide us from the face of him who sits on the throne, and from the wrath of the Lamb, for the great day of his wrath has come; and who is able to stand?”

Venus, Benjamin, is as big as the Earth.
“To me it seems like hell”, I said, while I was looking at it.
When I look around… There are many planets that are hidden, because they are invisible, said the angel of God. Let them but search! he said, I tell you this,

This year, 2012, is the year of the deception and the temptation and the confusion.
Man gets very tough. Therefore I tell you, Repent, who are listening. I have already sent you disasters, and still you do not take time to come to Me. I also called you by name, but now you have also heard of Me.

Christians, I tell you, remove all your bondages, please listen!
Also you there, come to Me. Let your body be as in the beginning. God will really not be mocked! I tell you this, God also said: Let us make man in our image,  Genesis 1, verse 26.

Let your body be a temple of the Holy Spirit, otherwise you are equal to this planet Venus, full of smoke and fire.
Therefore I tell you, Focus on Jesus Christ!

Matthew 13, verse 47 to 50  Again, the Kingdom of Heaven is like a dragnet, that was cast into the sea, and gathered some fish of every kind, which, when it was filled, they drew up on the beach. They sat down, and gathered the good into containers, but the bad they threw away. So will it be in the end of the world. The angels will come forth, and separate the wicked from among the righteous.

Benjamin, Prophets are never loved, you know that, do you?
They are afraid of the truth, even though I speak via you to them. Many believe it not, what I say to you, because they totally have no light of God in them.
You must go back, and from here, Benjamin, I’m saying goodbye, and say this yet, also to the one that is listening:

There is a planet with fallen angels, who want to deceive you on Earth!
You do not see them, but they are among you. They are invisible and come down from the planet, just above the Earth. Therefore I tell you, put on the armor of God, in order to be able to stand firm. Pray also for Benjamin and his wife, and lift them up in your prayers, I tell you. I have chosen them, to speak to you.

The battle has been fought in the heavenlies.
Be ready to meet the King of kings, because He is worthy of receiving all honor and glory and worship. Exalt Him, but He alone! He is worthy to receive all honor.
Meanwhile, I found myself in my bedroom… I suddenly sat on my bed. I was placed back, and the angel, Michaël, said to me yet: Servant, write down everything, which I have spoken to you, but take a good rest.
Shalom, Benjamin!