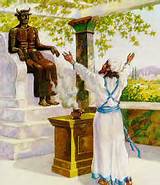 Hello, welcome! On July 21st, 2012, Prophet Benjamin Cousijnsen received the following message from the messenger angel of God, which I’d like to share with you.

Shalom, Benjamin! I greet you in the name of Yeshua HaMashiach. And my name is Israel.

I will tell you about a beautiful star.

1 Kings 11, verse 6  So Solomon did what was evil in the sight of the LORD and did not wholly follow the LORD, as David his father had done.
1 Kings 11, verse 10  And had commanded him concerning this thing, that he should not go after other gods. But he did not keep what the LORD commanded.
2 Kings 23, verse 13  The high places that were before Jerusalem, which were on the right hand of the mountain of corruption, which Solomon the king of Israel had built for Ashtoreth the abomination of the Sidonians, and for Chemosh the abomination of Moab, and for Milcom the abomination of the children of Ammon, did the king defile.

Benjamin, Solomon also wore a Star of David.
The Star of David was used in the world of magic, Arabic magic and witchcraft in the Middle Ages. Furthermore, the Druids used it for the witches’ sabbaths. Even the Zionists and Hitler used it, and many others! This star, which is a magical curse, was a curse they also had to wear in the war. In the end, Israel has this Star of David, which they actually should call Solomon’s star, as a flag. The Star of David was the symbol that had no popularity among the Jewish people, because it was a hexagram, without Jewish origin. It slowly takes the place of the Jewish symbol of the Menorah, the seven-branched lamp stand, which one also should not worship!

The Star of David is used as the seal in the Order of Freemasonry of Israel!

Exodus 20, verse 3  You shall have no other gods before me.

John 3, verse 17 and 18  For God did not send his Son into the world to condemn the world, but in order that the world might be saved through him. Whoever believes in him is not condemned, but whoever does not believe is condemned already, because he has not believed in the name of the only Son of God: “Yeshua HaMashiach, Jesus Christ!”

Israel, break with your star symbol!
And you, do not defile yourselves against the God of Isaac, Jacob and Abraham. Change your curse into a blessing. Choose the flag of the Lion of Judah, Yeshua HaMashiach, Jesus Christ! Let this be your flag and your star! I also say to you, Do not serve other gods and religions. Only Yeshua HaMashiach, Jesus Christ, is the only Way and the Life!

And then the angel of God said smiling: Benjamin, what will you do with your Star of David?
Then I said, smiling: “I think I’m going to destroy this Star of David, in the mighty name of Jesus Christ!”
The messenger angel spoke, Shalom for Israel, and he who breaks with all images and gods and symbols. Focus on Yeshua!
I’m going now, Benjamin, Shalom!