This prophetic message alerts you to the fulfilled revelations and true facts, concerning the spreading of ISIS fighters in Europe and worldwide! All revelations, everything, was already foretold and passed on in detail to Prophet Benjamin Cousijnsen, and shared with the world! Benjamin Cousijnsen is Prophet of the only true God, YHWH, Yeshua HaMashiach, Jesus Christ, and passes on daily to the people in the world today, what God commands him. 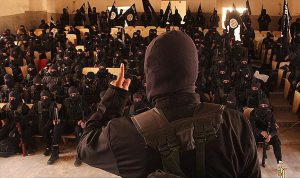 Hello, welcome! On September 14th, 2016, the messenger angel of God brought on, word for word, this revealing message of God to end-time Prophet of the last days, Benjamin Cousijnsen.

Shalom! I greet you in the lovely name of Yeshua HaMashiach, YHWH, Jesus Christ. Verily, my name is Revelado and I am a messenger angel of God.

Had Prophet Benjamin Cousijnsen not also revealed to you back then in 2015,
that the violence would start to increase, and that more than 20,000 refugees had come over, and that many disguised ISIS terrorists were involved, and that more than 15,000 valid passports and documents were already back then in their hands: of ISIS? Verily, now, in 2016, the number of passports has doubled, and the Arab and Western Intelligence Service sounds a big alarm now that many thousands of ISIS fighters have spread! Some of them with one goal: to carry out attacks!

Many are in Europe.
Some are begging, which is not prohibited. But there are rules which must be respected. “Many ISIS fighters have disappeared without a trace”, the Intelligent Services are saying. Guess why… how is that possible?

Verily!
Then listen to the messages of God, handed over to God’s true end-time Prophet, Benjamin Cousijnsen. Many thousands of ISIS fighters have spread already throughout the world, and most of them are in Europe, waiting for the signal to commit terrorist attacks! The way they operate is also in order to make schools into a one world religion, to bring the children together, and to influence them with Islam. And they also want to move the municipal institutions, and even the police, as well as the government, in their direction! They want to use and deploy the ISIS fighters with a higher IQ, in order to conquer the world, which is accompanied by inconspicuous work in Europe, and then in the meantime carry out attacks.

Soon one will get to cope with an attack in Europe again!
I’m going now, spoke the messenger angel of God, Ruacha, Yeshu, Shalom!