The Pope doesn’t think homosexuality or gender reassignment is a sin. Within the walls one commits sin after sin, and they have intercourse with each other, as well as Pope Francis. (After clicking the video, wait for a moment until it plays.) 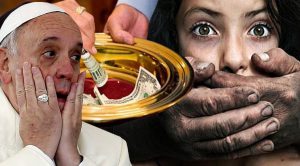 Hello, welcome! On March 20th, 2018, the messenger angel of God brought on the following message of God to God’s true end-time Prophet of the last days, Benjamin Cousijnsen.

Verily, you were warned about Pope Francis.
Just listen once to the message from July 29, 2013, titled: ‘Beware! His charismatic charms will blind you!’ Verily, behind his manipulating magic and tactics, the occult and idolatry are hiding. Within the walls one commits sin after sin! And they have intercourse with each other, as well as Pope Francis, who is responsible for the transgressions and who declares, among others, the homosexual popes and priests who got caught, to be free! Verily, my name is Michaël, a messenger angel of God.

In secret, many children of poor families have already been with the Pope within the walls.
And some parents received hush money, just in order to make it not public in the world, that children are also sexually abused there! The Pope doesn’t think homosexuality or gender reassignment is a sin. Also, within the walls, so-called humorous stage performances are performed by the popes and priests, as entertainment, in which one plays a woman as a man.

Verily, the Pope blinds the world, and the Catholic church is also guilty of this.
Sodom and Gomorrah were holy compared to what is now happening in Rome!

Titus 1, verse 15  To the pure, all things are pure; but to those who are defiled and unbelieving, nothing is pure; but both their mind and their conscience are defiled.

Psalm 94, verse 8  Consider, you senseless among the people; you fools, when will you be wise?

Repent, because everything will come to light!
I’m going now, spoke the messenger angel of God, Ruacha, Yeshu, Shalom!