THE PARENTS OF REAGINA WERE SPANISH CHRISTIANS, WHO GOT TO KNOW JESUS CHRIST AS THEIR SAVIOR AND MEDIATOR, DURING A STREET EVANGELISM! THEY DIED IN A CRASH, AND THEIR 3-YEAR-OLD DAUGHTER WENT ASTRAY! 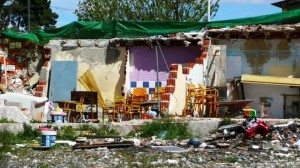 Shalom! I greet you in the wonderful name of Yeshua HaMashiach, Isa, Jesus Christ of Nazareth.

Verily I, Rafaël, was sent out to Chabolas in Spain with a special mission.
I ended up in a slum, which is a real ghetto; hundreds of Roma people live there. One discriminates against the Gypsy people. In Spain, one should not say: “I am a traveler, a gypsy”, because then one is immediately seen as a criminal, or mistreated. Roma people must even make so many efforts, in order to get their children into a school. Every time they encounter protests.
Verily, I am a messenger angel of God, and I was looking for Reagina. I walked there as a human being and I thought, ‘Who is criminal here, as one doesn’t give the Roman people any opportunities, and discriminates?’
The language Caló and the Roman people are threatened with extinction!

Read aloud: Matthew 7, verse 9 to 11  Here it is written: Or who is there among you, who, if his son asks him for bread, will give him a stone? Or if he asks for a fish, who will give him a serpent? If you then, being evil, know how to give good gifts to your children, how much more will your Father who is in heaven give good things to those who ask him!
The messenger angel of God spoke,

Verily, these people also want the best for each other.
Yeshua HaMashiach brought me near a dangerous demolition building, where this gypsy girl was sleeping on the couch under a lean-to.
The parents of Reagina were Spanish gypsies, who got to know the Lord Jesus Christ, during a street evangelism, and they died in a crash and left their 3-year-old daughter behind, who sometimes got some food from her surroundings, and thus grew up alone.
I myself was also dressed like one of them and thought of these words:

Matthew 10, verse 9 to 14  Don’t take any gold, nor silver, nor brass in your money belts. Take no bag for your journey, neither two coats, nor shoes, nor staff: for the laborer is worthy of his food. Into whatever city or village you enter, find out who in it is worthy; and stay there until you go on. As you enter into the household, greet it. If the household is worthy, let your peace come on it, but if it isn’t worthy, let your peace return to you. Whoever doesn’t receive you, nor hear your words, as you go out of that house or that city, shake off the dust from your feet.

I said very kindly, Hola, Shalom, Reagina!
Frightened, she jumped up suddenly bewildered, full of Spanish temperament, and grabbed a stick beside her, and wanted to hit me with that! Therefore I quickly decided then, to show her who I really was. She cried, “Help, holy mother Mary!”
Stop! I said. Mary was like you, not a saint but a human! She was just like you, not divine or perfect.

Luke 1, verse 30 and 31  The angel said to her, “Don’t be afraid, Mary, for you have found favor with God. Behold, you will conceive in your womb, and bring forth a son, and will call his name ‘Jesus.’”
And verse 28 and 29  Having come in, the angel said to her, “Rejoice, you highly favored one! The Lord is with you. Blessed are you among women!” But when she saw him, she was greatly troubled at the saying, and considered what kind of salutation this might be.
And verse 35  The angel answered her, “The Holy Spirit will come on you, and the power of the Most High will overshadow you. Therefore also the holy one who is born from you will be called the Son of God”.

James 5, verse 19 and 20  Here it is written: Brothers, if any among you wanders from the truth, and someone turns him back, let him know that he who turns a sinner from the error of his way will save a soul from death, and will cover a multitude of sins.

Colossians 2, verse 18  Here it is written: Let no one rob you of your prize by a voluntary humility and worshipping of the angels, dwelling in the things which he has not seen, vainly puffed up by his fleshly mind.

The girl said and asked, “But I thought that an angel, and Mary as the mother, prays and brings my prayer to God, right?”
The messenger angel of God answered:

John 12, verse 38 to 40  That the word of Isaiah the Prophet might be fulfilled, which he spoke, “Lord, who has believed our report? To whom has the arm of the Lord been revealed?” For this cause they couldn’t believe, for Isaiah said again, “He has blinded their eyes and he hardened their heart, Lest they should see with their eyes, And perceive with their heart, And would turn, And I would heal them”.
John 14, verse 6  Jesus said to him, I am the way, the truth, and the life. No one comes to the Father, except through me.
And verse 10 Don’t you believe that I am in the Father, and the Father in me? The words that I tell you, I speak not from myself; but the Father who lives in me does his works.

Reagina pointed at her statuette of Mary, grabbed it and gave it to me, and said: “I give you this as a gift!”
What am I supposed to do with that, Reagina? Because thus it is written in:

Exodus 20, verse 4 and 5  You shall not make for yourselves an idol, nor any image of anything that is in the heavens above, or that is in the earth beneath, or that is in the water under the earth: you shall not bow yourself down to them, nor serve them, for I, the LORD your God, am a jealous God, visiting the iniquity of the fathers on the children, on the third and on the fourth generation of those who hate me.

The girl said, “I smash it immediately to pieces!”
“What’s your name?” she asked.
Rafaël.
“Did you come to tell me this?”
Yes, Reagina, but…
“What about my illness?” asked the girl.
Is your salvation not much more important?
I, Rafaël, told her about Yeshua HaMashiach, Isa, Jesus Christ, and told her:

John 3, verse 16 and 17  For God so loved the world, that he gave his one and only Son, that whoever believes in him should not perish, but have eternal life. For God didn’t send his Son into the world to judge the world, but that the world should be saved through him.
The messenger angel of God spoke,

Together we prayed, and she accepted Jesus Christ as her true Savior and Mediator.
And I told her, this night you will be with Yeshua HaMashiach, Isa, Jesus Christ, with your mom and dad.
“Really?” she cried out happy!
Yes, really, I said, but do you have yet a wish, Reagina?
“Yes, that I get an ice-cream!”
By God’s power and will, the inside of the demolition building was immediately turned into an ice cream store, and together we ate an ice-cream with joy. And after this I said, I have to go again, adiós!
Ruacha, Yeshu, Shalom! spoke the messenger angel of God, and disappeared.