A message of God: The truth is made public 100%, why Saint Nicholas is racist and occult, in this revealing, informative, warning and also referring message of God, delivered on December 1, 2015, by God’s messenger angel, to Prophet Benjamin Cousijnsen, on behalf of Jesus Christ of Nazareth! 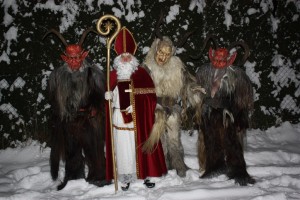 Shalom! I greet you in the wonderful name of Yeshua HaMashiach, Jesus Christ. Verily, my name is Carmaddar and I am a messenger angel of God.

Verily, the miter of the Roman Catholics has the form of a fish’s mouth.
This truly stands for the worship of Dagon, also known as Baal-Moloch, devil! Verily,

Luke 18, verse 15 to 17  They were also bringing their babies to him, that he might touch them. But when the disciples saw it, they rebuked them. Jesus summoned them, saying, “Allow the little children to come to me, and don’t hinder them, for the Kingdom of God belongs to such as these. Most certainly, I tell you, whoever doesn’t receive the Kingdom of God like a little child, he will in no way enter into it”.

One rather brings the children to the idol Wodan than to Yeshua HaMashiach, Jesus Christ, who is kadosh, holy!
Also listen to the message from October 18, 2013, entitled: ‘Saint Nicholas and Santa Claus come out of evil!’ And if you click the link, which you can find under Categories, under the name Holidays, you will find out everything about the holidays, what God now really thinks of that! Many questions are being answered, such as, among others: the meaning of Ascension and Pentecost, and the truth about Easter. Verily, on December 30, 2014, Yeshua HaMashiach, Jesus Christ, brought a message, which you can participate in, also this year, with New Year’s Eve. The message is called: ‘It stands for blessings: 12 grapes, take part in this!’

Verily, in the Evangelical Endtimemachine are many blessings to be found from Yeshua HaMashiach, Jesus Christ!
Verily, the Roman Catholic church has already been leading souls to satan, for many generations. I reveal to you, that also that so-called good holy man had a covenant with satan, and that he indeed had a Black Pete at his side, the devil! Also, after so many years, children often come home crying, because they are verbally abused by being called Black Pete!

In the Middle Ages it was already known that Black Pete stood for the devil, yes, with the roe and the bag!
Was Saint Nicholas racist?
Yes! Black Pete was also a slave, and served Saint Nicholas. He also bought up slaves, in order to serve him. It therefore falls under racism, and it humiliates the dark population. So Saint Nicholas was hypocritical. The names Odin, Wodan, Dagon, Moloch, are evil spirits, as well as satan!
I’m going now, Ruacha, Yeshu, Shalom! spoke the messenger angel of God, and disappeared.