PROPHETIC REVEALING MESSAGE, GIVEN TO THE PROPHET OF THE LAST DAYS, BENJAMIN COUSIJNSEN. LISTEN TO WHAT THE ANGEL OF THE LORD TELLS, ON BEHALF OF THE LORD GOD: THIS WILL HAPPEN JUST AFTER THE RAPTURE! 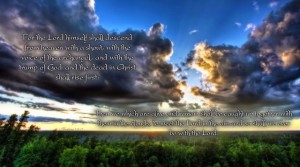 Hello, welcome! On October 25th, 2013, a messenger angel of the almighty God brought on this prophetic revealing message to His simple servant and true end-time Prophet of the last days, Benjamin Cousijnsen.

Shalom! I greet you in the wonderful name of Yeshua HaMashiach, Isa, Jesus Christ of Nazareth. Verily, my name is Rafaël and I am a messenger angel of God. I tell you the following..

When Yeshua HaMashiach, Isa, Jesus Christ, takes His children home, there will be blown immediately, at that moment, on the first trumpet by Yeshua HaMashiach himself, on His own golden trumpet.
Following immediately after this, many trumpets in the airspace will be heard, and the earth will tremble due to the trumpets! And it will be very unpleasant for those left behind, partly due to the large vibration and the global earthquake, which will be accompanied by many thunders and lightning bolts!

Verily, the hidden spirits will be visible among the residents, and their spaceships which are also now often seen, among others in Rome and with the pope and also with the White House of Obama.
Today, these fallen angels are already in contact with the earth, but will then take over the world totally as ‘visitors from space’, as they will be called, with help from the army of the United States.

There will be a complete chaos!
Airplanes will crash, trains will derail and there will be a global disaster. Even dykes will break.

There will come a day, a day of celebration, on which it is celebrated, that one is delivered from the ‘plague’, the Christians, who have been taken away by the visitors from space.
They will make those left behind believe, that the disappeared people was their work, and they will be received as heroes by Obama! We can already often see the Christian hatred among people. And precisely the Christians lose their jobs and one accuses them without cause, with lies. Why?
Because those invisible powers have now already taken over many people completely. This happens, because one had already banned Yeshua HaMashiach, Isa, Jesus Christ, in their mind. As a result, there is no more hope, no more protection for them. Verily, choose this day whom you want to serve!

It will go so far, that one thinks that one is truly in a vampire movie, where one is forced to go either for the chip, or to be burned alive in an auditorium.
Fear not! Babies and people with a disability, and also animals, big and small, and the Christians, who continued 100% steadfastly and chose for Yeshua HaMashiach, Isa, Jesus Christ, will, however, be with the Lord before the chaos emerges.