AGAIN BENJAMIN IS TAKEN ALONG BY AN ANGEL OF THE LORD INTO SPACE. AND IN THE ALMIGHTY NAME ABOVE ALL NAMES, ANOTHER, UNKNOWN AREA WITH PLANETS IS SHOWN, FROM WHICH THE ‘VISITORS FROM SPACE’, THE FALLEN ANGELS, ARE CARRYING OUT THEIR ATTACKS. 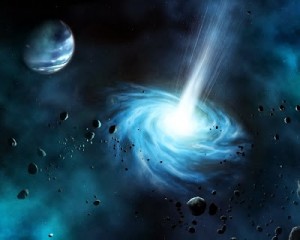 Shalom, Benjamin! Wake up.
“Yes, good morning! I’m awake,” said Benjamin.
Verily, verily, I tell you, my name is Berismeja. I am a messenger angel of God. I greet you in the almighty name of Yeshua HaMashiach, Isa, Jesus Christ of Nazareth.

Read aloud: Genesis 6, verse 11 and 12  Here it is written: The earth was corrupt before God, and the earth was filled with violence. God saw the earth, and saw that it was corrupt, for all flesh had corrupted their way on the earth.

Job 11, verse 7  Here it is written: Can you fathom the mystery of God? Or can you probe the limits of the Almighty?
The messenger angel of God spoke further,

Verily, follow me, Prophet Benjamin Cousijnsen, and you, listen…

Read aloud: Isaiah 24, verse 4 and 5  Here it is written: The earth mourns and fades away. The world languishes and fades away. The lofty people of the earth languish. The earth also is polluted under its inhabitants, because they have transgressed the laws, violated the statutes, and broken the everlasting covenant.

Benjamin writes: I saw that this messenger angel of God was about 8 feet 2 inches, I think.
She had beautiful long hair, and further she had piercing eyes and was clothed in bright fine linen, that looked whiter than snow. Also I was clothed with it, but with the messenger angel of God, I also saw a kind of bolts of lightning through it. When I watched her, I noticed that she picked up my thoughts about this, because she said: Fear not! I wear the protection of the Most High, come!
We walked down the stairs, as usual quietly, because the stairs creak despite walking softly. Without running into the front door this time, I went straight through the closed door. And for a moment the angel of the Lord just looked at me with a smile, as if she wanted to say, ‘You did it, give yourself a round of applause!’

Read aloud: Luke 1, verse 37  Here it is written: For everything spoken by God is possible.

Ezekiel 5, verse 10  Here it is written: Therefore the fathers shall eat the sons in the midst of you, and the sons shall eat their fathers; and I will execute judgments on you; and the whole remnant of you will I scatter to all the winds.
The messenger angel of God spoke,

Verily, God’s true beloved end-time Prophet, with your own eyes you’ve seen many signs of total takeover, as you also saw on the news, that many doghouses were being filled with dogs in China.
But this happens also in Indonesia and in many other countries! These dogs will directly be slaughtered, and they eat the dogs. But they even eat their own children! And many other animals, such as rats and also frogs. Throughout the generations, what the God of Abraham, Isaac and Jacob has created, was cursed by the fallen angels.
They ate babies and drank the blood. This already happened during the time of Enoch, and everything I say to you is even today in full swing!

Verily, you there, do you still not understand, why also your country is going to be punished?
You even give a name to a breath of wind and to a tornado or to some event. But to speak the truth and to say, that this is truly the work of God, because of disobedience, that you prefer however to leave aside!

Read aloud: Psalm 10, verse 1 to 4  Here it is written: Why do you stand far off, O LORD? Why do you hide yourself in times of trouble? In arrogance, the wicked hunt down the weak; They are caught in the schemes that they devise. For the wicked boasts of his heart’s cravings, He blesses the greedy, and condemns the LORD. The wicked, in the pride of his face, Has no room in his thoughts for God.

The messenger angel of God said, Verily, follow me!
On the street in front of the house, I was pulled along like a magnet again, quickly up in the air. In space I saw many planets shooting by, and the messenger angel of God pointed and said: Look, we are close to Pluto. I saw that it looked stony and icy.
Benjamin, Pluto is 1,416 miles. And we flew on…
I saw a kind of tube-like tunnel in front of me, with light bluish and grayish misty clouds, and we flew through it, very fast. I felt like superman, but this was real! The messenger angel Berismeja told me, that this is a wormhole in space, that they do know.

Suddenly, after all those flashed, I saw another kind of universe in front of us, but different…
The stars were not really shining. I saw stony and fire-like planets. The messenger angel of God called: In the almighty Name above all names I command you, in the name of Adonai, Elohím, Yeshua HaMashiach, Jesus Christ, Be revealed now!

It seemed as if a kind of veil was suddenly taken away, because I now saw 13 planets!
And from some of them, I saw scorpion shaped, boomerang-like spaceships coming out, including a large satellite-like spaceship, that was turning its satellite. Verily, these are the planets of the so-called ‘visitors from space’, who are actually the fallen angels!

Read aloud: Revelation 13, verse 8 to 10  Here it is written: All who dwell on the earth will worship him, everyone whose name has not been written from the foundation of the world in the book of life of the Lamb who has been killed. If anyone has an ear, let him hear. If anyone has captivity, he will go. If anyone is with the sword, he must be killed. Here is the endurance and the faith of the saints.

Benjamin writes further: From here they carry out attacks, and they do everything possible, to pull away the children of God from the only true God of Abraham, Isaac and Jacob.
Look once over there! said the messenger angel of God.
I saw another spaceship, where a kind of hatch opened, and I saw bat-like angels flying out, a kind of army. The angel of the Lord spoke,

Prophet Benjamin, one would like to be raptured and one also prays for the family and neighbors on earth, if they too can be saved.
And now Yeshua HaMashiach, Jesus Christ, intervenes and listens to the many prayers, and gives still many a chance, according to the heart’s desires and prayers! But, one complains… “Lord, take us home!”

Read aloud: 1 Corinthians 13, verse 4 to 7  Here it is written: Love is patient and is kind; love doesn’t envy. Love doesn’t brag, is not proud, doesn’t behave itself inappropriately, doesn’t seek its own way, is not provoked, takes no account of evil; doesn’t rejoice in unrighteousness, but rejoices with the truth; bears all things, believes all things, hopes all things, endures all things.
The messenger angel of God spoke further,

Many are selfish in reality, if they are but delivered and saved.
But God does not work like that! He looks at every heart and thought, and His love was also precisely for the lost.

Read aloud: John 3, verse 16  Here it is written: For God so loved the world, that he gave his only begotten Son, that whosoever believes in him should not perish, but have everlasting life.
The messenger angel of God spoke further,

Verily, you who’re listening, Revelation 13 is equal to 2013.
But I tell you also, Though this has been said to you, however, some events will also take place afterwards. Understand this well!

These fallen angels are attacking the world every time, and it is up to you what you do against it.

Read aloud: Revelation 16, verse 11  Here it is written: and they blasphemed the God of heaven because of their pains and their sores. They didn’t repent of their works.
The messenger angel of God spoke further,

Verily, stand in your power, for everything comes closer, as you can see through the events!
I’ll bring you back now. Come! said the angel of the Lord.
And we came back via the same route, and the messenger angel of the Lord said goodbye: Ruacha, Yeshu, Shalom!