Revealing message of God: This is a revelation from God about who Prophet Benjamin Cousijnsen really is. He is more than a Prophet! This has been revealed to you this day; now is the time for it, spoke the angel of the Lord. You will, among others, also hear or read about the choice that God’s Prophet Benjamin Cousijnsen made, concerning the place, the household, in order to come and accomplish God’s work and task on earth, and God’s mission and laws on earth, as a simple man! 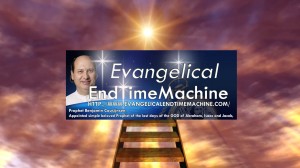 Hello, very welcome! On February 29th, 2016, the angel of the Lord brought on, word for word, the following revealing message of God to Prophet Benjamin Cousijnsen, on behalf of the almighty God, YHWH, the God of Abraham, Isaac and Jacob.

Verily, God has made the earth in His way, without the help of a human being, or any heavenly being.
God is so powerful that every word that is being pronounced, such as Genesis 1, verse 3, is immediately fulfilled!

Matthew 6, verse 10  Let your Kingdom come. Let your will be done, as in heaven, so on earth.
Verily, my name is Revelado and I am a messenger angel of God!

Verily, God’s existence is not limited by time.
He has always existed and will always continue to exist!

Romans 1, verse 20  For the invisible things of him since the creation of the world are clearly seen, being perceived through the things that are made, even his everlasting power and divinity; that they may be without excuse.

Verily, there was more before the beginning of the earth!

Revelation 5, verse 11  I saw, and I heard something like a voice of many angels around the throne, the living creatures, and the elders; and the number of them was ten thousands of ten thousands, and thousands of thousands.
And verse 13 and 14  I heard every created thing which is in heaven, on the earth, under the earth, on the sea, and everything in them, saying, “To him who sits on the throne, and to the Lamb be the blessing, the honor, the glory, and the dominion, forever and ever! Amen! The four living creatures said, “Amen!” The elders fell down and worshiped.

And Hebrews 1, verse 7 to 9  Of the angels he says, “Who makes his angels winds, and his servants a flame of fire.” But of the Son he says, “Your throne, O God, is forever and ever. The scepter of uprightness is the scepter of your Kingdom. You have loved righteousness, and hated iniquity; therefore God, your God, has anointed you with the oil of gladness above your fellows”.
And verse 13 and 14  But which of the angels has he told at any time, “Sit at my right hand, until I make your enemies the footstool of your feet?” Aren’t they all serving spirits, sent out to do service for the sake of those who will inherit salvation?
And Hebrews 2, verse 3 and 4  How will we escape if we neglect so great a salvation – which at the first having been spoken through the Lord, was confirmed to us by those who heard; God also testifying with them, both by signs and wonders, by various works of power, and by gifts of the Holy Spirit, according to his own will?

Verily, God’s Kingdom was always there all along, as well as His heavenly beings.
Verily, Yeshua HaMashiach, Jesus Christ, came to the earth, and chose to be a human being. Not a baby who was born in a castle, but He chose for the simple way. Similarly, the following applies:

Hebrews 13, verse 2 and 3  Don’t forget to show hospitality to strangers, for in doing so, some have entertained angels without knowing it. Remember those who are in bonds, as bound with them; and those who are ill-treated, since you are also in the body.

Verily, the body of a heavenly being is different from a human body.
Think here that satan spoke in the form of a beast: the serpent and the dragon, and as a human being. He is an extraterrestrial being, who is a kind of chameleon, but nevertheless spirit!

Verily, kadosh, holy is Yeshua HaMashiach, Jesus Christ!
Prophet Benjamin Cousijnsen was born into a poor family, and also chose not to be born in a castle as a Prophet. He is, however, more than a Prophet, and also always already had a place in heaven, from the beginning!

And Hebrews 1, verse 14  Aren’t they all serving spirits, sent out to do service for the sake of those who will inherit salvation?

And Isaiah 37, verse 16  “LORD of hosts, the God of Israel, who is enthroned among the cherubim, you are the God, even you alone, of all the kingdoms of the earth. You have made heaven and earth.”

Verily, Benjamin Cousijnsen is among you.

Matthew 5, verse 17  Don’t think that I came to destroy the law or the Prophets. I didn’t come to destroy, but to fulfill.

Verily, he who rejects him as God’s true end-time Prophet, will never see the Kingdom of God!
Verily, on earth he came in human flesh, as a kind of cocoon, in order to accomplish God’s work and mission, and to fulfill the law.

Hebrews 4, verse 13  There is no creature that is hidden from his sight, but all things are naked and laid open before the eyes of him with whom we have to do.

Therefore, this day the full truth has been revealed to you!

Revelation 22, verse 6  He said to me, “These words are faithful and true. The Lord God of the spirits of the Prophets sent his angel to show to his bondservants the things which must happen soon”.
And verse 16 and 17  I, Jesus, have sent my angel to testify these things to you for the assemblies. I am the root and the offspring of David; the Bright and Morning Star. The Spirit and the bride say, “Come!” He who hears, let him say, “Come!” He who is thirsty, let him come. He who desires, let him take the water of life freely.

And John 3, verse 16 to 20  For God so loved the world, that he gave his one and only Son, that whoever believes in him should not perish, but have eternal life. For God didn’t send his Son into the world to judge the world, but that the world should be saved through him. He who believes in him is not judged. He who doesn’t believe has been judged already, because he has not believed in the name of the one and only Son of God. This is the judgment, that the light has come into the world, and men loved the darkness rather than the light; for their works were evil. For everyone who does evil hates the light, and doesn’t come to the light, lest his works would be exposed.

And Revelation 22, verse 20 and 21  He who testifies these things says, “Yes, I come quickly.” Amen! Yes, come, Lord Jesus. The grace of the Lord Jesus Christ be with all the saints. Amen.

Today, this has been revealed to you; now is the time for it.
I’m going now, spoke the angel of the Lord, Ruacha, Yeshu, Shalom!