SEPTEMBER 23, 2013  REVELATION FROM GOD: BENJAMIN COUSIJNSEN, GOD’S END-TIME PROPHET, IS TAKEN ALONG IN THE SPIRIT. THE MESSENGER ANGEL SHOWS HIM A FEMA CAMP WHICH HAS ALREADY BEEN PUT INTO OPERATION AT THIS TIME. SOME FEMA CAMPS ARE ACTIVE AND CHRISTIANS ARE ELIMINATED! 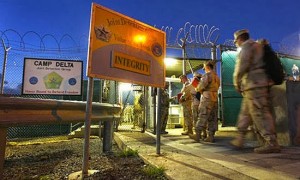 On September 23rd, 2013, Prophet of the last days, Benjamin Cousijnsen, wrote down the following report…

Shalom! I greet you, Prophet Benjamin Cousijnsen, in the wonderful Name of Yeshua HaMashiach, Isa, Jesus Christ of Nazareth. Verily, I am a messenger angel of God and my name is Sindaya.

Verily, look, Prophet Benjamin Cousijnsen, I move you…
Suddenly the messenger angel of God made a swing, and I felt a kind of glorified wind. And instantly I was in the air, and the first thing I did at once was to have a quick look at myself, because I was in bed in my underwear. Thankfully… I was clothed… ‘Imagine!’ I thought, ‘in underwear through the air’. I was relieved.
Sindaya, the messenger angel, was not alone, he flew in front of me and I now heard his powerful voice that said: Follow me, Prophet Benjamin!
I thought, ‘I follow him automatically and I look like a magnet’.
Also underneath me and above me flew two angels of God who protected me. I saw that they were warriors because they wore a harness and were armed, and they looked pretty strong. They looked like bodybuilder angels! While I thought this to myself, I also thought, ‘Where am I going?’
We flew through various cloud formations, and I saw land and sea beneath us.

The messenger angel Sindaya spoke, Benjamin, on May 15, 2012, I also took you along.
Think of the prophetic message: ‘Prophecy: A glimpse into the near future!’
I thought, I’m so often visited by the angels of God, that I do not remember it.

We arrived at a kind of concentration camp
But the messenger angel of God, Sindaya, told me, that this was one of the many American camps: FEMA camps. Benjamin, the people are so blind; they have to wake up!

More than 1,000 detention camps have been built and fully equipped
These camps are located throughout America, Canada, Alaska… Worldwide these FEMA camps are already found! Verily,

Read aloud: Revelation 13, verses 7 to 9  Here it is written: It was given to him to make war with the saints, and to overcome them. Authority over every tribe, people, language, and nation was given to him. All who dwell on the earth will worship him, everyone whose name has not been written from the foundation of the world in the book of life of the Lamb who has been killed. If anyone has an ear, let him hear.
Revelation 20, verse 4  Here it is written: I saw thrones, and they sat on them, and judgment was given to them. I saw the souls of those who had been beheaded for the testimony of Jesus, and for the word of God, and such as didn’t worship the beast nor his image, and didn’t receive the mark on their forehead and on their hand. They lived, and reigned with Christ for the thousand years.

Verily, Prophet Benjamin, many Christians will deny Yeshua HaMashiach, Isa, Jesus Christ, after all.
Even though they knew that they must not take the mark – the number of the beast – they took it anyway, because one did not want to die of hunger! But to perish forever? One did not think of that.

Benjamin writes further, I saw that there were people in that camp.
And the messenger angel said, Many countries and the heads of governments have joined the New World Order. And the antichrist can now already, without reason, have the people picked up, who in his view could pose a danger in the future, and have them transported to a FEMA camp.
Furthermore, I saw in this FEMA camp special gas chambers and chambers where push buttons with a rotary control were placed beside the doors, with which you are able to regulate the heat inside that chamber. Think of a microwave oven. Everything looked modern. There was even electricity in the rooms where the prisoners were. I walked on along with the messenger angel and saw a sort of waiting room, where people were: families with children. I saw a woman with long blond hair being nice, and I read her name: ‘Kesia’, and I saw ‘USA’ was added to it. She spoke in a nice way and said, “I’ll stay with you for a moment; Mom and Dad will be back shortly, if they listen carefully and are kind”.

I saw two soldiers take the man and the woman to an interrogation room…
And whom I saw there… was Obama, along with two other soldiers. And I saw a kind of doctor in a type of doctor’s coat. I heard that woman, Kesia, talking to the children. She asked, “Do you also have a Bible? And do you also go to church?”
The messenger angel of God spoke further: Their parents will perish because they do not take the number. And Obama was furious!

He who takes the number belongs to satan forever!
Benjamin, we must go back now. I say to everyone: You must enter the ark! Yeshua HaMashiach, Jesus Christ, is your only Way.

Many Christians have now already been transported in secret to these FEMA camps in the U.S. and in other countries.
Soon, Yeshua HaMashiach, Isa, Jesus Christ, will strike and receive His children! Just be patient for a moment, but fear not and do not let Him go!

Read aloud: John 3, verse 16  Here it is written: For God so loved the world, that he gave his only begotten Son, that whosoever believes in him should not perish, but have everlasting life.
And verse 36  One who believes in the Son has eternal life, but one who disobeys the Son won’t see life, but the wrath of God remains on him.

James 3, verses 13 and 14  Here it is written: Who is wise and understanding among you? Let him show by his good conduct that his deeds are done in gentleness of wisdom. But if you have bitter jealousy and selfish ambition in your heart, don’t boast and don’t lie against the truth.

The messenger angel of God continued, Prophet Benjamin, I move you from here back into your bed.

Verily, Europe also cooperates with the New World Order.
Everything is in full swing!
Verily, I’m also going now, Ruacha, Yeshu, Shalom!
And after I heard this, I was back in my bed. Then I immediately wrote everything down, word for word.