A message of God:  • People join in for fear, resulting in the radical radicalization increasing worldwide  • Pope Francis’ statement to cooperate with all religions  • Church leaders blow along with everyone! (After clicking the video, wait for a moment until it plays.) 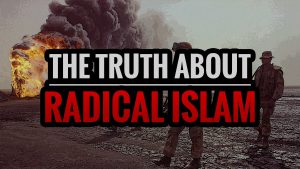 Shalom, welcome! On March 8th, 2017, a messenger angel of God brought on this revealing, informative and warning message of God to end-time Prophet of the last days, Benjamin Cousijnsen.

Verily, silent waters run deep!
Verily, my name is Ratiabra and I am a messenger angel of God.

Verily, the radical radicalization is increasing worldwide!
This is because one is fearing the radical Islamists, and one joins them for fear that otherwise something will happen to them. Islam and the Koran have taught the radical Islamists, both men and women, along with children, to hate their neighbor, the West among others, and if possible to destroy!

From many attacks it is known that one has entered the country as a refugee.
It is said that ISIS has fled and has been expelled. But they forget that many are in asylum seeker centers! Also listen to the message titled: ‘Violence will increase with the arrival of the refugees!’ Verily, Prophet Benjamin Cousijnsen had already revealed that they want to take over the world.

Verily, Pope Francis also said recently that all religions should cooperate more with Islam and should accommodate them.
Verily, many church leaders mislead themselves by adjusting God’s Word, and by just approving the unnatural and false religions, and everything that goes in against God! After all, it comes down to one thing with them: pleasing everyone and filling the church well. At least, this is how it looks like they are richly blessed! But the God of Abraham, Isaac and Jacob prefers a small church which adheres to the commandments and is pure, rather than an overcrowded church full of hypocrites, scribes and pharisees. Verily, these are the signs of the end times!

2 Timothy 2, verses 16 to 18  But shun empty chatter, for they will proceed further in ungodliness, and their word will consume like gangrene, of whom is Hymenaeus and Philetus; men who have erred concerning the truth, saying that the resurrection is already past, and overthrowing the faith of some.
And 2 Timothy 4, verses 3 and 4  For the time will come when they will not listen to the sound doctrine, but, having itching ears, will heap up for themselves teachers after their own lusts; and will turn away their ears from the truth, and turn aside to fables.

And 2 Peter 2, verse 19  Promising them liberty, while they themselves are bondservants of corruption; for a man is brought into bondage by whoever overcomes him.
Verse 22  But it has happened to them according to the true proverb, “The dog turns to his own vomit again,” and “the sow that has washed to wallowing in the mire”.
Verse 2  And many will follow their destructive ways, the way of truth shall be evil spoken by their fault.

John 8, verse 19  They said therefore to him, “Where is your Father?” Jesus answered, “You know neither me, nor my Father. If you knew me, you would know my Father also”.
Verse 12  Again, therefore, Jesus spoke to them, saying, “I am the light of the world. He who follows me will not walk in the darkness, but will have the light of life”.