PROPHECY ON MAY 25, 2012 TO BENJAMIN COUSIJNSEN, PROPHET OF THE LORD: GOD WILL PUNISH SOME PLACES, BECAUSE OF THEIR SINS! BUT IF THEY WILL REPENT AND CHANGE… HE WILL NOT DO SO! 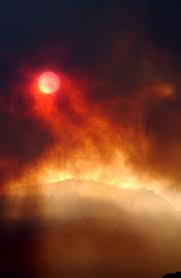 Hello! This prophetic vision has been given to Benjamin Cousijnsen on May 25th, 2012, by the Lord Jesus Christ, in Hebrew also called Yeshua HaMashiach. Benjamin receives every word and letter from God through the messenger angel of the Lord God. Benjamin writes,

The angel of God appeared to me in the night and talked to me this message and these words of God.
Benjamin, should I put My people again forty years in the desert, before they will listen to Me?
I tell you, start focusing on Yeshua HaMashiach.

I saw this in my dream, with images…
Benjamin, speak this, what I show you, spoke the angel. I saw innumerable many angels, I wasn’t able to count them.
Look, Benjamin, I the Lord tell you this: Look, this is Lelant, Cornwell. These people need to repent and turn away from their idols and adultery. Keep your marriage in honor. I saw the angels of God, standing aligned above the sea and they began to blow, three times and every time they blew, the waves got higher. The water seemed like a storm, that turned so strong, that the water entered into the land. The water even reached the Caribbean Bay, said the angel. I saw that the houses were floating away and were destroyed, and I saw a lot of gabled roofs. The angel said, The water will reach unto Little Trevarrack

Also, I warn Getafe, Spain!
I have enough from your haughtiness, loose behaviour and stubbornness. You know everything better and you’re living a loose life! Don’t you see that the problems, also in your country, come because of disobedience? Am I not the only Way Out?

San Nicolás De Los Garza, said the angel of God.
I have looked it up on the map and saw that this is in Mexico. Don’t hide your sins, I have seen them. What must I do more, in order to let your knees bow? says the Lord. There will be a few, entering in by the narrow gate. The angel gave:

Luke 13, verse 23 to 25  Here it is written: One said to him, “Lord, are they few who are saved?” He said to them, “Strive to enter in by the narrow door, for many, I tell you, will seek to enter in, and will not be able. When once the master of the house has risen up, and has shut the door, and you begin to stand outside, and to knock at the door, saying, ‘Lord, Lord, open to us!’ then he will answer and tell you, ‘I don’t know you or where you come from.’
The angel of God spoke further,

When you confess and acknowledge your sins, I will cleanse you, says the Lord.
Don’t be disobedient. I love you so! speaks the Lord, and gave:

John 3, verse 18  Here it is written: He who believes in him is not judged. He who doesn’t believe has been judged already, because he has not believed in the name of the only begotten Son of God.

I can renounce the disasters, says the Lord, but if you don’t accept Me and take Me seriously, this will happen soon now.
Even hail and fire, and even your breath shall have difficulties because of the sun. This also counts for the other countries! But he who is in Jesus Christ has nothing to fear.
I will visit every country.
Shalom, Benjamin