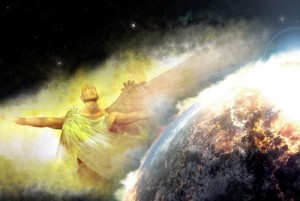 Hello, welcome! On June 29th, 2012, Prophet Benjamin Cousijnsen received the following message from the messenger angel of God, which I’d like to share with you.

The technological angels were also there in the time of Enoch.
One underestimates their extraordinary knowledge, of these excluded angels. And so there are many planets.

Mark 13, verse 26  You there, listen carefully… And then they will see the Son of Man coming in the clouds with great power and glory.

He will send forth the angels, in order to gather the elect from the four winds of the Earth, from one end of the Earth to the other.
So the elect will be caught up in the clouds, into the sky. Benjamin, spoke the angel of God, later I will talk about the fallen angels again. But for now, carefully listen further. On the clouds you will be taken to God’s Kingdom. You will be received by thousands, ten thousands, tens of thousands of angels. The number goes far beyond you!

The colors there are also very different: brighter and lighter.
Just think of the rainbow. When God made the Earth, there was also a lot more color. But because man changed, the colors also changed. Your Earth is no longer the way it was really like in the beginning.

The people let themselves be taken over by demons.
The demon world is among you because one rejects Jesus Christ.

As an angel of God, I point out to you to get ready and to focus on His return!
I also have passed on so much to God’s Prophet, Benjamin, but I ask you, What are you doing with it? And you there, Pastor, wake up! And don’t put honey in the mouth of your sheep. Stand in God’s power! And quickly become fervent in spirit once, because God falls asleep because of you! Get yourselves ready because your sheep must stand ready, for the King is coming!

I tell you, you there, Keep your eye on your volcano, Washington, US, your Mount Rainier!
Because if you continue like that with your plans, which go in against the God of Israel, God will provide himself with a great cleaning and use every means necessary. The God of Abraham, Isaac, and Jacob is not the same God as Allah! I tell you this: This counts for all countries. There is only one God, with a capital G. And you want to make all the gods and idols and churches one! Don’t you see that you have been taken over? You have brought the disasters in your country upon yourselves! I repeat: You will remember this message, when it is in full swing. God sends you the same events as in the time of Moses!

You are thinking, ‘How far will God go?’
If you – I’m talking to all countries! – if you acknowledge Jesus Christ as the Son of God, and if you keep His commandments, and destroy your idols, the God of Isaac, Jacob, and Abraham shall truly be merciful to you.

The technological angels, fallen angels, have already caused problems in the brains of test soldiers,
because they are taken over by the helmet! One goes very far. You can move yourself very quickly already, because they want super soldiers! Welcome to wonder world! Aside from the helmets, they are also being taken over massively. One is testing waves through the satellite, and does experiments. I tell you, the kingdom of satan is among you!

There will even be animals that one has never seen before; in hell however, they have seen them!
These will be born out of nothing with you on Earth. Many people complain that they hear voices. And the demons go so far, until you are entirely taken over.

Amsterdam, yes, Amsterdam,
you are enjoying all uncleanness, and consider it normal. If you repent very quickly, then there will be mercy. But if you do not quickly repent, there will unexpectedly be an unknown virus among you. And God will continue to deal with you. One will be struck. Repent, and don’t come too late!

Indonesia, Japan, Hawaii, China, Germany, the Netherlands, all countries,
don’t be surprised! I have spoken to you, spoke the angel of God, in Yeshua HaMashiach, in Jesus Christ’s Name. God’s hand strikes, His mouth blows, and His feet trample! And God’s children now need to be more and more vigilant, and cling to Jesus Christ, because satan roars. But the Lion of Judah roars with the victory! Everybody, every country, has been warned. He who does not want to hear will perish, whatever country! Benjamin, he who is not willing to surrender, yes, he will perish. But who does not want to surrender, if one can be saved? Jesus Christ is the only Way and the Truth and the Life. And no one comes to the Father, except through Him.

Children of God, set your minds on the things that are from above.
It’s true, I tell you, spoke the angel of God. Do you feel the birth pains of His return? The birth pains are now over, because I tell you: The birth is about to begin! Your King of kings is coming! Fear not for what is going to happen meanwhile in this world.

They don’t know what they are doing anymore!
A mother throws the baby off the balcony. A man hangs himself. A young couple throw themselves under the train. A car drives through the shopping mall, and drives into the shops. Those who do not repent to Jesus Christ will do very strange things now, because they have been taken over.

I am telling you: The time is near!
And Jesus Christ is coming very, very soon.
I tell you, Benjamin, and you there, Shalom!