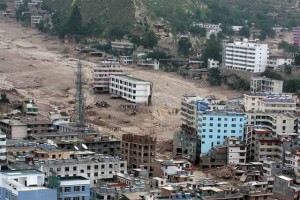 Hello, very welcome! On March 10th, 2014, a messenger angel of the almighty God, the God of Abraham, Isaac and Jacob, brought on this revealing, prophetic and warning message of God to end-time Prophet Benjamin Cousijnsen, Prophet of the last days.

Shalom! I greet you in the wonderful name of Yeshua HaMashiach, Isa, Jesus Christ, the Son of God. Verily, my name is Profetira and I come from the Holy of Holies.

Verily China, hear!
Break with it, with your idolatries and worshipping and adoring of the Dalai Lama, your god. Verily, you worship the beast! What blessings have your idols brought you?
And kadosh!

Verily, you have repeatedly been punished with an earthquake, and much more.
Count your blessings one by one. Prophet Benjamin Cousijnsen has already often warned you. Listen to the message, entitled: ‘Aug 9, 2012 Prophecy fulfilled: Typhoon 3 hits China’ and the title: ‘China, hear why your country is hit each time!’
Verily, hear now! Open your ears and your eyes now. You fight against the true God!

Revelation 12, verse 7 to 9  Here it is written: There was war in the sky. Michaël and his angels made war on the dragon. The dragon and his angels made war. They didn’t prevail, neither was a place found for him any more in heaven. The great dragon was thrown down, the old serpent, he who is called the devil and satan, the deceiver of the whole world. He was thrown down to the earth, and his angels were thrown down with him.
And verse 11 and 12  They overcame him because of the Lamb’s blood, and because of the word of their testimony. They didn’t love their life, even to death. Therefore rejoice, heavens, and you who dwell in them. Woe to the earth and to the sea, because the devil has gone down to you, having great wrath, knowing that he has but a short time.

And wisdom is needed for that which is now being revealed here.
Your dragon, also called ‘sly snake’ and ‘devil’, was cast upon the earth. And guess, where he ended up? Why did one say: “Woe to the earth and to the sea”?
Because the dragon ended up there with you! Thus your Great Wall of China has come into being by the fallen angels. Verily, and this explains again all your devilish practices and idolatries and magic. Verily, this also explains that you, who have not accepted Yeshua HaMashiach, Isa, Jesus Christ, are carrying along a curse, and just stimulate the work of satan and will perish.

Verily, once more you will be hit, because of disobedience!
Verily, accept the challenge, and worship only the Son of God, Yeshua HaMashiach, Isa, Jesus Christ of Nazareth. Verily, get hold of a Bible and examine it.

And thus it is written in John 3, verse 16 to 20  For God so loved the world, that he gave his only begotten Son, that whoever believes in him should not perish, but have eternal life. For God didn’t send his Son into the world to judge the world, but that the world should be saved through him. He who believes in him is not judged. He who doesn’t believe has been judged already, because he has not believed in the name of the only begotten Son of God. This is the judgment, that the light has come into the world, and men loved the darkness rather than the light; for their works were evil. For everyone who does evil hates the light, and doesn’t come to the light, lest his works would be exposed.
John 4, verse 23 to 30  But the hour comes, and now is, when the true worshippers will worship the Father in spirit and truth, for the Father seeks such to be his worshippers. God is spirit, and those who worship him must worship in spirit and truth. The woman said to him, “I know that Messiah comes,” he who is called Christ. “When he has come, he will declare to us all things.” Jesus said to her, I am he, the one who speaks to you. At this, his disciples came. They marveled that he was speaking with a woman; yet no one said, “What are you looking for?” or, “Why do you speak with her?” So the woman left her water pot, and went away into the city, and said to the people, “Come, see a man who told me everything that I did. Can this be the Christ?” They went out of the city, and were coming to him.

Verily, this woman left her water and her precious water pot, and accepted the living water of Yeshua HaMashiach, Isa, Jesus Christ, and was the first one, who took action and testified about Him.
And many came to faith!
Verily, you who’re listening, though you think: ‘If I am just a good person’, it does not work like that.

2 Corinthians 11, verse 13 to 15  Here it is written: For such men are false apostles, deceitful workers, masquerading as Christ’s apostles. And no wonder, for even satan masquerades as an angel of light. It is no great thing therefore if his ministers also masquerade as servants of righteousness, whose end will be according to their works.

Verily, invite Yeshua HaMashiach, Isa, Jesus Christ into your life, into your heart.
And ask for forgiveness of your sins and for your country. Go to Him and focus on Him! Take no part in satan’s works. Choose this day whom you want to serve: heaven or hell.

China, soon a blow will be brought about again.
I’m going now, Ruacha, Yeshu, Shalom! He who does not want to hear, will perish, spoke the messenger angel of God, and disappeared.

Note: Full text display for the deaf, hearing impaired and speakers of other languages.
Use Google Translate and bookmark it.
Dear people, spread these messages! More translators are welcome