PROPHECY JULY 27, 2012  IN THIS PROPHETIC VISION, BENJAMIN COUSIJNSEN IS NOTIFIED BY AN ANGEL OF GOD, THAT EACH COUNTRY NOW HAS GOD’S SWORD ABOVE ITS HEAD. ONE MUST TAKE GOD’S MESSAGES SERIOUSLY! 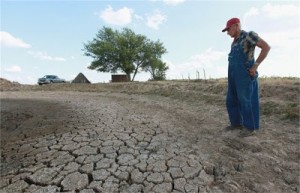 Hello! This prophecy was passed on to Benjamin Cousijnsen on the night of the 27th of July 2012. Benjamin writes,

First I saw the sky and the light, which was fiercely bright on the eyes.
And it looked like the Sun had holes in it, places that were much brighter.
Benjamin, a voice said, the United States has already been affected by drought, and many corn fields are destroyed. One will have to take God’s messengers seriously, and especially the ones that God has chosen, in order to warn! Bring God’s words powerfully, when God reprimands. The Almighty speaks as He speaks through you or your helper. And it’s not a sweet fruit, which one always enjoys. Whoever condemns you, condemns God. He directs and brings everything. Everything is in full swing!

Obama will say, “Do you still believe in God, who does this to you?” and will say, “God does not exist, I am your God.”

The angel told me, that the heat will be unbearable!
Spain will also feel the consequences of poor listening. One should not turn to images, but to Jesus Christ. Your images don’t bring blessing, but curse! Each country has God’s sword above its head. God himself has visited your country. Many people say, they are Christians, and are arrogant and want all the wealth, and want to be more than their neighbor, and want to rise even above God, if it is possible.

Benjamin, seven bad years have begun.
But not for the children of God. For God will give His sign for departure.
Minette, Regina, Heini, Esther, also you who are listening, Jesus Christ is calling you by name! It is about your salvation and His humble love towards you. I greet you in His name, who wants to open your eyes. Come now and be saved in the name of Jesus Christ. Bring your sins to the cross, you who’re listening, and everything that has cursed your country.

Furthermore, I saw people fighting over water outside the shop.
I also saw rivers, almost without water.
Then I woke up and wrote down everything.