August 9, 2017  Revelation of God: In a conversation with Pope Francis and Donald Trump, Pope Francis spoke about an extreme global world population extermination. Hear and read why. Furthermore, among other things, God is clear! God disapproves the unnatural and doesn’t make any allowances. (After clicking the video, wait for a moment until it plays.) 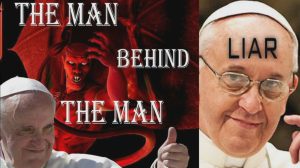 Hello, welcome! A messenger angel of God brought on the following message of God to end-time Prophet Benjamin Cousijnsen.

Verily, during the visit of Donald Trump, Pope Francis talked about an extreme global world population extermination!
This also has to do with the goal of wanting to change the climate.

Genesis 6, verses 11 and 12  In God’s sight, the earth had become corrupt and was filled with violence. God saw that the earth was corrupt, because all creatures behaved corruptly on the earth.

Verily, today mankind is being taken over more and more.
And even in church, satan is working to adapt the unnatural, such as lesbians, and gays, and transgenders, and even transsexuals, everything that the God of Abraham, Isaac and Jacob hates! Even the Bible will be adapted to this thinking, because it is believed that what is written in the Bible contains discriminatory statements against the gender changing person who is dissatisfied. Satan says, “Do it! Enjoy life because life is short!” One even thinks sex with animals is quite normal by now, and also that young children must be able to marry very young.

Verily, and that’s how one goes in against God’s commandments, as if He has made a mistake.
Shame on you! And even the Pope hopes that a priest may be seen as a spiritual person, and that both the past and the present at the sexual level, the relationship with little to big, will be considered normal, and that sexual intercourse can simply be seen as a spiritual transmission of God’s spiritual fruits, full of blessings!

The Jezebel spirit of satan is very active!
And also the characteristics of the behavior and appearance become more visible by the day. Some show possessive behavior, and are like the fallen angels in appearance, in fact, like satan! And they allow it, that the fallen angels move freely, without caring about fear of God’s condemnation or His commandment! Verily, my name is Serfarma and I am a messenger angel of God.

Romans 1, verses 24 to 28  And so God has given those people over to do the filthy things their hearts desire, and they do shameful things with each other. They exchange the truth about God for a lie; they worship and serve what God has created instead of the Creator himself, who is to be praised forever! Amen. Because they do this, God has given them over to shameful passions. Even the women pervert the natural use of their sex by unnatural acts. In the same way the men give up natural sexual relations with women and burn with passion for each other. Men do shameful things with each other, and as a result they bring upon themselves the punishment they deserve for their wrongdoing. Because those people refuse to keep in mind the true knowledge about God, he has given them over to corrupted minds, so that they do the things that they should not do.
And verse 32  They know that God’s law says that people who live in this way deserve death. Yet, not only do they continue to do these very things, but they even approve of others who do them.
And Romans 2, verse 27  And so you Jews will be condemned by the Gentiles because you break the Law, even though you have it written down and are circumcised; but they obey the Law, even though they are not physically circumcised.

And Hebrews 13, verse 4  Marriage is to be honored by all, and husbands and wives must be faithful to each other. God will judge those who are immoral and those who commit adultery.