Parents, don’t lay your children down in the invisible world, where they are being taken over. The unthinkable happens more often than you think! 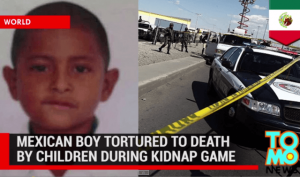 Hello, welcome! On November 15th, 2016, the messenger angel of God brought on the following message of God to end-time Prophet of the last days, Benjamin Cousijnsen.

Verily, more and more even children are taken over!
A young 4-year-old child had to go to the toilet at McDonalds, and was suddenly stuck, thanks to teenagers that had sprayed glue on the toilet seat, on the toilet of the children and disabled. Her little bottom were severely torn by this!
Verily, and yet another, Anneke, 15 years old, committed suicide because of the harassment at school. And there are many others like her.

And in Mexico a 6-year-old boy was killed by a group of children,
and previously tortured, murdered and then buried by five teenagers. The unthinkable happens more often than you think! It even happens that parents are murdered by their children! Verily, children are also often influenced by the parents, or by games, TV, media, magic, school, friends, etc. etc.

Verily, I am the messenger angel Restia, and say to you:
Parents, don’t lay your children down in the invisible world, where they are being taken over! Your only rescue and salvation is Yeshua HaMashiach, YHWH, Jesus Christ. Repent and surrender yourself, and confess your sins!

Ephesians 2, verse 8  For by grace you have been saved through faith, and that not of yourselves; it is the gift of God,
And Ephesians 4, verse 17 to 23  This I say therefore, and testify in the Lord, that you no longer walk as the rest of the Gentiles also walk, in the futility of their mind, being darkened in their understanding, alienated from the life of God, because of the ignorance that is in them, because of the hardening of their hearts; who having become callous gave themselves up to lust, to work all uncleanness with greediness. But you did not learn Christ that way; if indeed you heard him, and were taught in him, even as truth is in Jesus: that you put away, as concerning your former way of life, the old man, that grows corrupt after the lusts of deceit; and that you be renewed in the spirit of your mind.

Verily, He wants you to be saved!
Only He, Yeshua HaMashiach, YHWH, Jesus Christ, saves and protects you. Surrender yourself and pray together as a family!
I’m going now, spoke the messenger angel of God, Ruacha, Yeshu, Shalom!