Prophetic warning and fulfillments of God: Verily, some say, “What punishment will again strike us now? We are, as Prophet Benjamin said, severely punished, which is predicted!” 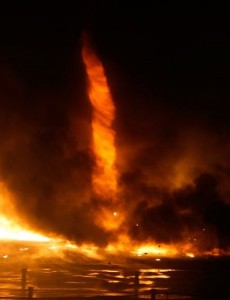 Hello, welcome! On October 7th, 2014, a messenger angel of God, the God of Abraham, Isaac and Jacob, brought on word for word the following warning and prophetic message to Benjamin Cousijnsen, end-time Prophet of the last days.

Shalom! I greet you in the wonderful name of Yeshua HaMashiach, Jesus Christ. Verily, my name is Lovesadai. Verily, I am a messenger angel of God.

The characteristics are now finally getting clear for many box thinkers,
that the disasters in various places are no forces of nature, but the work of God! In Mexico and many countries, they have experienced a fire tornado, in the form of a hand of God. Verily,

Acts 7, verse 51  You stiff-necked and uncircumcised in heart and ears, you always resist the Holy Spirit! As your fathers did, so you do.

Verily, how often did not the messenger angel Thunder strike, Japan?
And did Thunder not say: Repent before I come by?
Also Syria and Russia and the United States, and many countries, are continuing to be punished, as long as you do not repent. Examine yourself once!
“Who, me?”
Yes, you there! Verily, some say, “O, my God! What punishment will again strike us now? We are, as Prophet Benjamin said, severely punished, which is predicted!”
Verily, put down your weapons once. Do not worship some image! Verily,

John 3, verses 17 to 21  For God didn’t send his Son into the world to judge the world, but that the world should be saved through him. He who believes in him is not judged. He who doesn’t believe has been judged already, because he has not believed in the name of the one and only Son of God. This is the judgment, that the light has come into the world, and men loved the darkness rather than the light; for their works were evil. For everyone who does evil hates the light, and doesn’t come to the light, lest his works would be exposed. But he who does the truth comes to the light, that his works may be revealed, that they have been done in God.

Verily, if you do not break with your idolatries, the Almighty will do so!
Stop your unclean evil ways and everything that is an abomination in God’s eyes!

Joshua 24, verses 14 and 15  Now therefore fear the LORD, and serve him in sincerity and in truth; and put away the gods which your fathers served beyond the River, and in Egypt; and serve the LORD. If it seems evil to you to serve the LORD, choose you this day whom you will serve; whether the gods which your fathers served that were beyond the River, or the gods of the Amorites, in whose land you dwell: but as for me and my house, we will serve the LORD.

Verily, the world has been warned!
Look ahead. All idols are swimming in the water. And behold, where have your gods and your house gone? See God’s tears and your tears. Was your disobedience worth all this, to not even be able to enter into Heaven? Receive what you deserve: blessing or curse!

Also, India, Turkey, and Rome will certainly not go unpunished.
Nothing is hidden, including that one approves that which is against natural. These are also not God’s works. They even hold pagan and devilish rituals! The lightning has often already struck there. But the biggest blow is yet to be made public from Rome, when one says that the Pope is seriously ill!
I’m going now, spoke the messenger angel of God, Ruacha, Yeshu, Shalom!