Verily, don’t be deceived by your eyes! Many fruits are affected by the lies and the works of satan. God works like that, and He sometimes allows the evil, in order to leave the strongest, who have not allowed themselves to be misled and do stand behind Prophet Benjamin Cousijnsen. 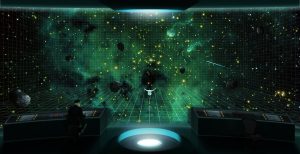 Shalom! My name is Hetrick, and I greet you all in the full truth of Yeshua HaMashiach, YHWH, Jesus Christ.

Verily, in the dramatic final stage in the end times it is obvious that some who serve the Lord will let Him down.
And in 1 Timothy 4, verse 1 it says very clearly that many follow seducing spirits. And in verse 2 it says that they are branded as with hot iron, through the hypocrisy of men who speak lies. Also listen to the message from August 17, 2012, entitled: ‘At this moment there is a separation of spirits!’

Many say: “I only believe in the things that I can see”.
And the technological fallen angels will just show you their images! In Hebrews 11, verse 1 it says: Faith is the evidence of things not seen.

On July 17, 2012, in the message entitled:
‘Behavioral modifying rays and more!’ it was said, among other things, that satan hurries and wants global control over everything. He is like a runaway out-of-control lunatic who is the leader in your world, your wonder world, in order to take you over, including with false media images about Prophet Benjamin Cousijnsen.

Satan even uses virtual images of a projected Jesus…
and will tell you things that are according to the will of satan. Because satan hates the works of God! They, the fallen angels, were already there in the times of Enoch. God warned you in the message from June 29, 2012, through His true Prophet who passed on, that one should not underestimate the knowledge of the technological fallen angels. Through the book ‘RUACHA, YESHU, SHALOM!’, Yeshua HaMashiach, YHWH, Jesus Christ, has seriously warned you many times. In spite of this, many have learned nothing from it!

Verily, listen once carefully.
Many fruits have been affected by the lies and the works of satan!

Read aloud: Matthew 7, verse 22 and 23  Many will tell me in that day, ‘Lord, Lord, didn’t we prophesy in your name, in your name cast out demons, and in your name do many mighty works?’ Then I will tell them, ‘I never knew you. Depart from me, you who work iniquity’.

Verily, every soul who speaks evil will be charged before God!
In Heaven, no rotten fruits and slanderers and lies and workers, who allow themselves to be infected só much, can be found. Pride will fall! Verily, the rotten fruits will end up into the fire. God works like that, and He sometimes allows the evil, in order to leave the strongest, who have not allowed themselves to be misled and do stand behind Prophet Benjamin Cousijnsen. Verily, now it turns out, one recognizes the spirit by its fruit!

Look once in the book ‘RUACHA, YESHU, SHALOM!’ and all those wonderful, encouraging messages:
more than 3,000 supernatural messages. Now it appears, who really stood behind the full truth, and were one. Verily, I, Hetrick, tell you: he is God’s true Prophet. Don’t be deceived by your eyes! Slanderers, and those who curse, and gossipers, are not an example. You will never find a slanderer, or gossiper, or someone who destroys God’s works, in Heaven. Many are now infected! Verily, you either stand behind God’s works and Prophet Benjamin Cousijnsen, or you can better go, if you are not strong enough and will go for the truth. You can clearly see now that satan wants to ruin the blessings and what God has established. ‘Is this God’s work?’ you think, ‘or from the devil?’
I know better than that!

This Thursday no live messages will be spoken, said Yeshua HaMashiach, YHWH, Jesus Christ.
But this will be a day of sadness in Heaven, because of the fact that one has been allowing oneself to be misled só much by satan! All messages about slanderers and gossipers, and about the works of fallen angels, will be placed this Thursday, in order to shake some awake yet! He who does not want to hear, will perish.
I’m going now, Ruacha, Yeshu, Shalom! spoke Hetrick, and disappeared.