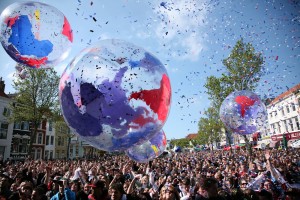 Hello, welcome! On Tuesday, May 5th, 2015, a messenger angel of God brought on the following message to Prophet Benjamin Cousijnsen.

Shalom! I greet you in the wonderful name of Yeshua HaMashiach, Jesus Christ. Verily, my name is Bimalek and I am a messenger angel of God.

Leviticus 19, verse 31  Don’t turn to those who are mediums, nor to the wizards. Don’t seek them out, to be defiled by them. I am the LORD your God.

Verily, kadosh, holy is Yeshua HaMashiach, Jesus Christ!
Verily, one commemorates everything and defiles oneself.

Romans 1, verse 21 and 22  Because, knowing God, they didn’t glorify him as God, neither gave thanks, but became vain in their reasoning, and their senseless heart was darkened. Professing themselves to be wise, they became fools.

Acts 5, verse 18 to 20  And they laid hands on the apostles, and put them in public custody. But an angel of the Lord opened the prison doors by night, and brought them out, and said, “Go stand and speak in the temple to the people all the words of this life”.

And Luke 1, verse 37  For everything spoken by God is possible.

And Mark 14, verse 46  They laid their hands on him, and seized him.
And Mark 15, verse 12 to 14  Pilate again asked them, “What then should I do to him whom you call the King of the Jews?” They cried out again, “Crucify him!” Pilate said to them, “Why, what evil has he done?” But they cried out exceedingly, “Crucify him!”
And verse 25 to 27  It was the third hour, and they crucified him. The superscription of his accusation was written over him, “THE KING OF THE JEWS”. With him they crucified two robbers; one on his right hand, and one on his left.
And verse 31 and 32  Likewise, also the chief priests mocking among themselves with the scribes said, “He saved others. He can’t save himself. Let the Christ, the King of Israel, now come down from the cross, that we may see and believe.” Those who were crucified with him insulted him.

And Psalm 92, verse 4 to 6  For you, O LORD, have made me glad through your work. I will triumph in the works of your hands. How great are your works, O LORD! Your thoughts are very deep. A senseless man doesn’t know, neither does a fool understand this.
And Psalm 91, verse 14  Because he has set his love on me, therefore I will deliver him. I will set him on high, because he has known my name.

And Mark 16, verse 5 and 6  Entering into the tomb, they saw a young man sitting on the right side, dressed in a white robe, and they were amazed. He said to them, “Don’t be amazed. You seek Jesus, the Nazarene, who has been crucified. He has risen. He is not here. Behold, the place where they laid him”!

And Psalm 116, verse 8 and 9  For you have delivered my soul from death, my eyes from tears, and my feet from falling. I will walk before the LORD in the land of the living.

And Proverbs 16, verse 20  He who heeds the Word finds prosperity. Whoever trusts in the LORD is blessed.