Revelation of God: Verily, prophet Mohammed was taken over, an instrument of satan/Allah! 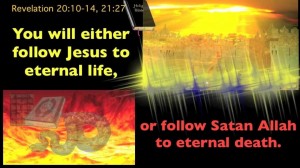 Hello, welcome! On November 11th, 2014, the following message was brought on, word for word, to end-time Prophet Benjamin Cousijnsen by an angel of the Lord, on behalf of the God of Abraham, Isaac and Jacob.

Shalom! I greet you in the wonderful name of Yeshua HaMashiach, Jesus Christ. Verily, my name is Suramich and I am the messenger angel of God. Verily, listen attentively!

The true gospel of the God of Abraham, Isaac and Jacob, the God of all flesh and the God of Israel, cannot be eradicated.
Nothing and no one, or authority whatsoever, or attempts of the god of war doctrine – satan himself – is able to overcome the God of Israel and the Christians!

Verily, however, the only almighty and righteous God of love says to you in:

John 4, verse 22  You worship that which you don’t know. We worship that which we know; for salvation is from the Jews.
John 14 verse 6  Jesus said to him, I am the way, the truth, and the life. No one comes to the Father, except through me.
John 3, verse 16 to 21  For God so loved the world, that he gave his one and only Son, that whoever believes in him should not perish, but have eternal life. For God didn’t send his Son into the world to judge the world, but that the world should be saved through him. He who believes in him is not judged. He who doesn’t believe has been judged already, because he has not believed in the name of the one and only Son of God. This is the judgment, that the light has come into the world, and men loved the darkness rather than the light; for their works were evil. For everyone who does evil hates the light, and doesn’t come to the light, lest his works would be exposed. But he who does the truth comes to the light, that his works may be revealed, that they have been done in God.

Verily, Prophet Benjamin Cousijnsen is God’s holy Prophet.
But would he come with messages, in order to exterminate a people, to burn and behead and tear apart God’s creature, then this would mean that he would have been taken over, and that he may marry four women! Verily, prophet Mohammed was taken over, an instrument of satan/Allah. Listen also to the message, entitled: ‘The difference between Jesus Christ and Mohammed!’ and the message: ‘The angel Gabriël never appeared to Mohammed!’ Verily, you can look up the title in the Evangelical Endtime Machine in the bar ‘Search’.
Verily,

John 12, verse 37 to 41  But though he had done so many signs before them, yet they didn’t believe in him, that the word of Isaiah the Prophet might be fulfilled, which he spoke, “Lord, who has believed our report? To whom has the arm of the Lord been revealed?” For this cause they couldn’t believe, for Isaiah said again, “He has blinded their eyes and he hardened their heart, lest they should see with their eyes, and perceive with their heart, and would turn, and I would heal them.” Isaiah said these things when he saw his glory, and spoke of him.

Verily, this is the full truth!
The Quran is the book of Allah, the god of hatred, who wants to take over the world, as already has been revealed in 2012 to God’s true, beloved, simple end-time Prophet, one of God’s witnesses: Benjamin Cousijnsen, who wrote down everything and brought it to light, in the name of Jesus Christ, Yeshua HaMashiach.

I’m going now, Ruacha, Yeshu, Shalom! spoke the angel of the Lord, the messenger angel of God, and disappeared.