WHILE JACOB SLEPT, HE SAW THE STAIRWAY AND ALL THE ANGELS. DID HE DREAM OR NOT? FURTHERMORE, EVEN THEY SAW ANGELS AND RECEIVED MESSAGES! 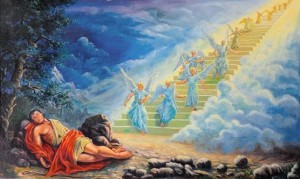 Hello, verily welcome! On August 26th, 2013, the messenger angel of God brought on the following message from the almighty God, the God of Abraham, Isaac and Jacob, to end-time Prophet Benjamin Cousijnsen.

Shalom! I greet you in the wonderful Name of Yeshua HaMashiach, Isa, Jesus Christ from Nazareth.

Verily, verily, I tell you, I am sent forth to God’s beloved Prophet of the last days, Benjamin Cousijnsen.
I am a messenger angel of the God of Abraham, Isaac and Jacob, the almighty God of all that lives! My name is Surayach. Verily, you there, listen once very attentively!

Read aloud: Genesis 28, verses 10 to 12  Here it is written: Jacob went out from Beersheba, and went toward Haran. He came to a certain place, and stayed there all night, because the sun had set. He took one of the stones of the place, and put it under his head, and lay down in that place to sleep. He dreamed. Behold, a stairway set up on the earth, and the top of it reached to heaven. Behold, the angels of God ascending and descending on
And verse 16  Jacob awakened out of his sleep, and he said, “Surely, the LORD is in this place, and I didn’t know it”.
The messenger angel of God spoke further,

Verily, Jacob thought he was dreaming, and while he slept, he saw the stairway and all those angels.
Was he or was he not dreaming? The way Jacob saw this and the way the Lord spoke to him, it was more than a dream! His body fell into a deep sleep, and in the spirit he saw the reality: that which he was allowed to see!

Read aloud: Numbers 12, verses 1 to 16  Here it is written: Miriam and Aaron spoke against Moses because of the Ethiopian woman whom he had married; for he had married an Ethiopian woman. They said, Has the LORD indeed spoken only by Moses? Hasn’t he spoken also by us? The LORD heard it. Now the man Moses was very meek, above all the men who were on the surface of the earth. The LORD spoke suddenly to Moses, and to Aaron, and to Miriam, Come out you three to the tent of meeting. The three came out. The LORD came down in a pillar of cloud, and stood at the door of the Tent, and called Aaron and Miriam; and they both came forth. He said, Hear now my words: if there be a Prophet among you, I the LORD will make myself known to him in a vision, I will speak with him in a dream. My servant Moses is not so; he is faithful in all my house: with him will I speak mouth to mouth, even apparently, and not in dark speeches; and the form of the LORD shall he see: why then were you not afraid to speak against my servant, against Moses? The anger of the LORD was kindled against them; and he departed
The cloud removed from over the Tent; and, behold, Miriam was leprous, as white as snow: and Aaron looked at Miriam, and, behold, she was leprous. Aaron said to Moses, Oh, my lord, please don’t lay sin on us, for that we have done foolishly, and for that we have sinned. Let her not, I pray, be as one dead, of whom the flesh is half consumed when he comes out of his mother’s womb. Moses cried to the LORD, saying, Heal her, God, I beg you. The LORD said to Moses, If her father had but spit in her face, shouldn’t she be ashamed seven days? let her be shut up outside of the camp seven days, and after that she shall be brought in again. Miriam was shut up outside of the camp seven days: and the people didn’t travel until Miriam was brought in again. Afterward the people traveled from Hazeroth, and encamped in the wilderness of Par
The messenger angel of God spoke further,

Verily, so Moses was also a meek man, just as meek as Prophet Benjamin Cousijnsen.
Verily, the Lord spoke mouth to mouth, and thus not in riddles, and also, as I already said to you in Numbers 12, verse 4, that Moses and Aaron and Miriam went to the tent. There the Lord was waiting for them, and called Aaron and Miriam forward; yes face to face, mouth to mouth, spoke the almighty Lord! And as the Lord spoke then, thus speaks the Lord still today, and does not allow it, for His words and His works, to be weakened by anyone, nor by the churches!

The God of Abraham, Isaac and Jacob is the Same today to all eternity.
So this also means that God’s chosen, meek, simple Prophet of the last days, Benjamin Cousijnsen, receives angels in the almighty name of Yeshua HaMashiach, Jesus Christ, the Son of God. Verily, an angel spoke to Hagar, and two angels went to Sodom. And Jacob also met angels, and Joseph and Mary saw angels. And in this time, nothing has changed in that respect!