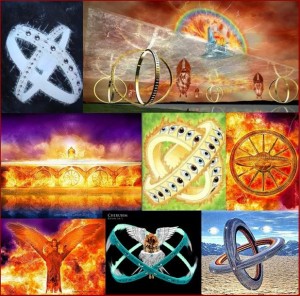 Hello, very welcome! I invite you to read along and also study everything, what the Lord God allowed to be brought on, through a messenger angel of God to end-time Prophet Benjamin Cousijnsen. The Lord will reveal to you new things!

Shalom! I greet you in the wonderful name of Yeshua HaMashiach, Jesus Christ. Verily, I am the messenger angel of God and my name is Chemihud.

Hebrews 1, verse 7  Of the angels he says, “Who makes his angels winds, and his servants a flame of fire.”
Hebrews 1, verse 14  Aren’t they all serving spirits, sent out to do service for the sake of those who will inherit salvation?

Revelation 3, verse 21  He who overcomes, I will give to him to sit down with me on my throne, as I also overcame, and sat down with my Father on his throne.
Read aloud: Revelation 4 verses 6 to 11  Before the throne was something like a sea of glass, similar to crystal. In the midst of the throne, and around the throne were four living creatures full of eyes before and behind. The first creature was like a lion, and the second creature like a calf, and the third creature had a face like a man, and the fourth was like a flying eagle. The four living creatures, each one of them having six wings, are full of eyes around and within. They have no rest day and night, saying, “Holy, holy, holy is the Lord God, the Almighty, who was and who is and who is to come!” When the living creatures give glory, honor, and thanks to him who sits on the throne, to him who lives forever and ever, the twenty-four elders fall down before him who sits on the throne, and worship him who lives forever and ever, and throw their crowns before the throne, saying, “Worthy are you, our Lord and God, the Holy One, to receive the glory, the honor, and the power, for you created all things, and because of your desire they existed, and were created!”

Verily, remarkable characteristics are:
Seraphim have only one face and six wings, and Seraphim are above and around God’s throne. They worship God with a threefold “Holy!” Verily,

Read aloud: Revelation 4, verses 4 and 5  Around the throne were twenty-four thrones. On the thrones were twenty-four elders sitting, dressed in white garments, with crowns of gold on their heads. Out of the throne proceed lightnings, sounds, and thunders. There were seven lamps of fire burning before his throne, which are the seven Spirits of God.

Genesis 3, verse 24  So he drove out the man; and he placed Cherubs at the east of the garden of Eden, and the flame of a sword which turned every way, to guard the way to the tree of life.

Read aloud: Revelation 19, verse 12  His eyes are a flame of fire, and on his head are many crowns. He has names written and a name written which no one knows but he himself.
And verse 16  He has on his garment and on his thigh a name written, ‘KING OF KINGS, AND LORD OF LORDS’.

Psalm 99, verse 1  The LORD reigns! Let the peoples tremble. He sits enthroned among the cherubim. Let the earth be moved.

Isaiah 37, verse 16  O LORD of hosts, the God of Israel, who is enthroned among the cherubim, you are the God, even you alone, of all the kingdoms of the earth. You have made heaven and earth.

Daniel 7, verse 9  I saw until thrones were placed, and one who was ancient of days sat: his clothing was white as snow, and the hair of his head like pure wool; his throne was fiery flames, and its wheels burning fire.

Deuteronomy 4, verse 24  For the LORD your God is a devouring fire, a jealous God.