A message of God with references to previously conveyed messages that refer to and reveal the truth about Obama, the antichrist! You can find them by typing in the title of the message in the Evangelicalendtimemachine.com. 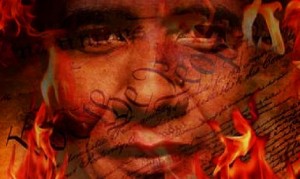 Hello, welcome! December 20, 2015 – The messenger angel of God brought on the following message to Benjamin Cousijnsen, end-time Prophet of the last days.

Verily, some say among themselves:
“If Barack Obama, who is indicated in the Holy Scriptures, means flash, lightning, in Hebrew, and his car is called beast, then how can it be that he has only a year as  president? And if he were to resign, then what would be the truth, even though he went in against God’s commandments?”

Verily!
On November 5, 2014, the God of Abraham, Isaac and Jacob, brought to you the revealing message, which removed a veil, entitled: ‘Revelation of God: The appearance that Obama took on as a human clone comes from Pharaoh Aka Obamunaki!’ Verily, in this message, that you should not overlook, the following was revealed: ‘Verily, the elections are nothing.’ Listen certainly to this revealing message, that the messenger angel Rama brought! Verily, don’t allow yourself to be misled by his charms, either of the antichrist Obama or the pope, his pioneer.

Verily, many do not even realize that they now already worship Barack Obama, the beast!

Revelation 13, verse 4  They worshiped the dragon, because he gave his authority to the beast, and they worshiped the beast, saying, “Who is like the beast? Who is able to make war with him?”
And verse 8  All who dwell on the earth will worship him, everyone whose name has not been written from the foundation of the world in the book of life of the Lamb who has been killed.

Verily, the antichrist plays a game with the world, through the media and in public.
And thousands follow him, as well as many Christians!

Revelation 19, verse 20 and 21  The beast was taken, and with him the false prophet who worked the signs in his sight, with which he deceived those who had received the mark of the beast and those who worshiped his image. These two were thrown alive into the lake of fire that burns with sulfur. The rest were killed with the sword of him who sat on the horse, the sword which came forth out of his mouth. All the birds were filled with their flesh.

Verily, who can say: 1+1 = The antichrist revealed?
Also this message can be found using the Search bar. Verily, in 2014, on February 5, 2014, Obama said: “Let’s make this year a year of action!” And indeed, the year was full of action and violence and takeover! Verily,

Sirach 24, verse 24  Don’t stop being strong in the Lord, but cling to him so that he might strengthen you. The Lord Almighty alone is God, and there’s no savior except for him.

And John 3, verse 16 and 17  For God so loved the world, that he gave his one and only Son, that whoever believes in him should not perish, but have eternal life. For God didn’t send his Son into the world to judge the world, but that the world should be saved through him.