AUGUST 12, 2012  MORE DETAILS ARE BEING REVEALED ON THE INFLUENCE, WHICH THE FALLEN ANGELS HAVE HAD THROUGHOUT TIME, UNTIL THE PRESENT TIME. GOD REVEALS THIS NOW, THAT MAN MIGHT BE AWAKENED. 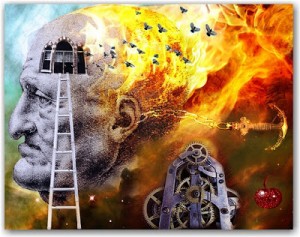 Hello, welcome! On August 12th, 2012, Prophet Benjamin Cousijnsen received the following message, which I’d like to share with you.

Benjamin, Shalom! I greet you in the name of Yeshua HaMashiach, Jesus Christ. My name is Camelia.

Benjamin, as in the days of Enoch the fallen angels consumed the people, who were born from the women, and even drank the blood of newborn babies, and ate their flesh.
You might be wondering, who had conceived the violent weapons, such as swords, knives, shields, breastplates…
They also learned to handle metal from the fallen angels.
The women had to have painted eyelids and wear bracelets.
There was a lot of knowledge, even of sorcery, enchantments, and the cutting of roots, and herbs.
The fallen angels also had the knowledge of the technology, which has been released and is among you!

The fallen angels have one purpose, and that is keeping humanity away from God…
through their knowledge, and they pass on their knowledge to their people, who bring it on the market, and who have already been taken over.

People have games where killing is central.
They say: “It’s just a game!”

The television, the force behind it, says: “Look!”

Psalm 8, verse 5  For you have made him a little lower than God…

The fallen angels can also make themselves invisible and visible, just like God’s angels!
The fallen angels are working with the people, who are already controlling you. Satan and his principalities and powers have pulled many away from God!

Many Christians are like vacuum cleaners.
One sucks everything in from the word of God… Hallelujah! However, when the vacuum cleaner is full, what do you do then? And when the dust bag is so full, nothing gets in anymore. You become spiritually deaf. And nothing gets inside anymore, because you kept everything for yourself. One only talks about Jesus Christ in church. You think, ‘I am born again, I go to church. This is enough’. Satan was also born again, and was also once in heaven with God. Don’t fool yourself! Many vacuum cleaners were jammed and became broken anyway. All events can be found on the earth.

One is so being taken over by all this electronic equipment!
When did you open up your Bible? You only had time for the fallen angels… the TV, computer, games, cellphone, and so on. Seek the things above and you will be blessed and saved. With Jesus Christ you are more than a conqueror! Also don’t partake in the practices which are not from God. Protect yourself by His precious Blood, every day, so that you may grow!

Shalom! spoke the messenger angel of God, and disappeared.